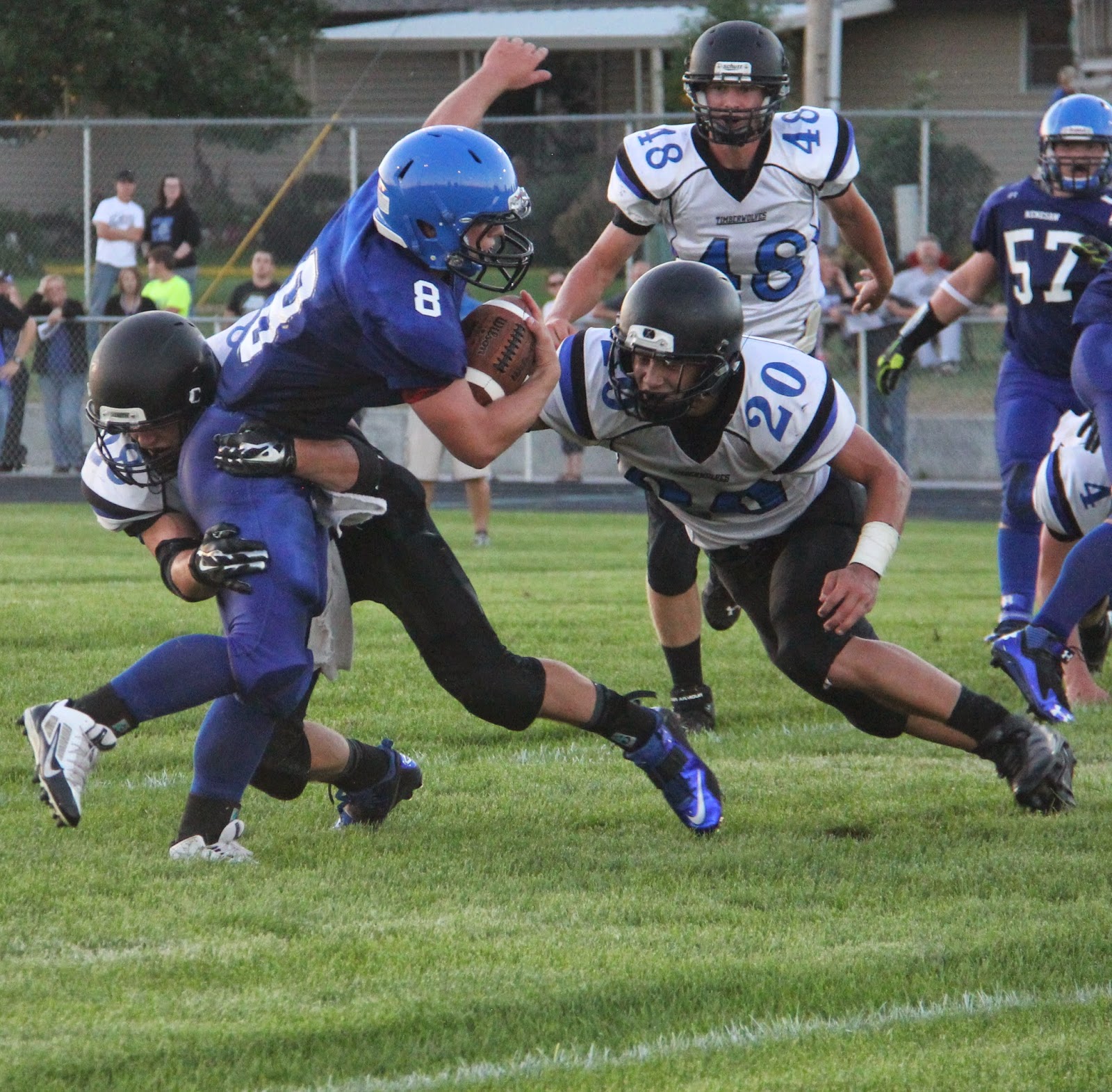 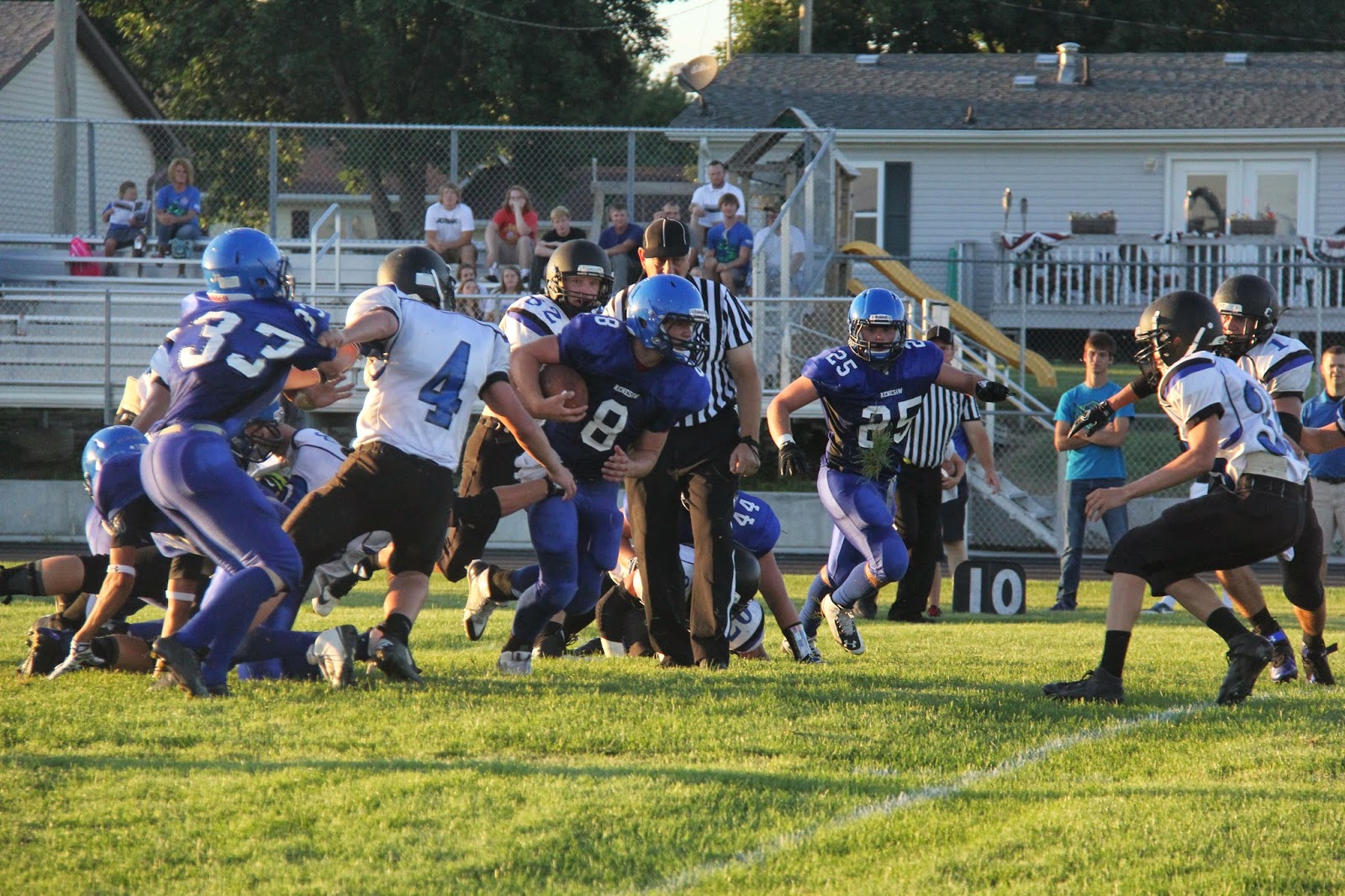 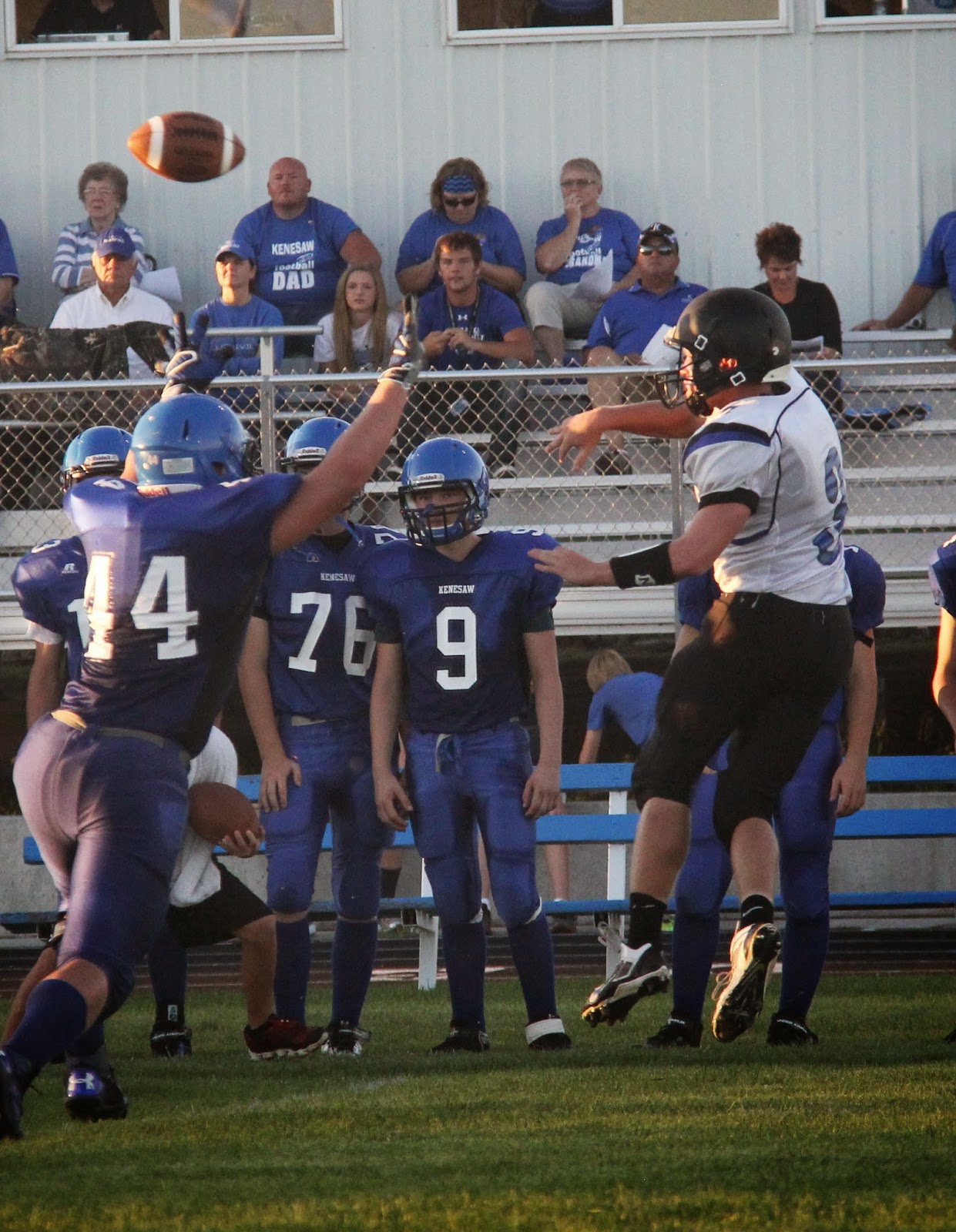 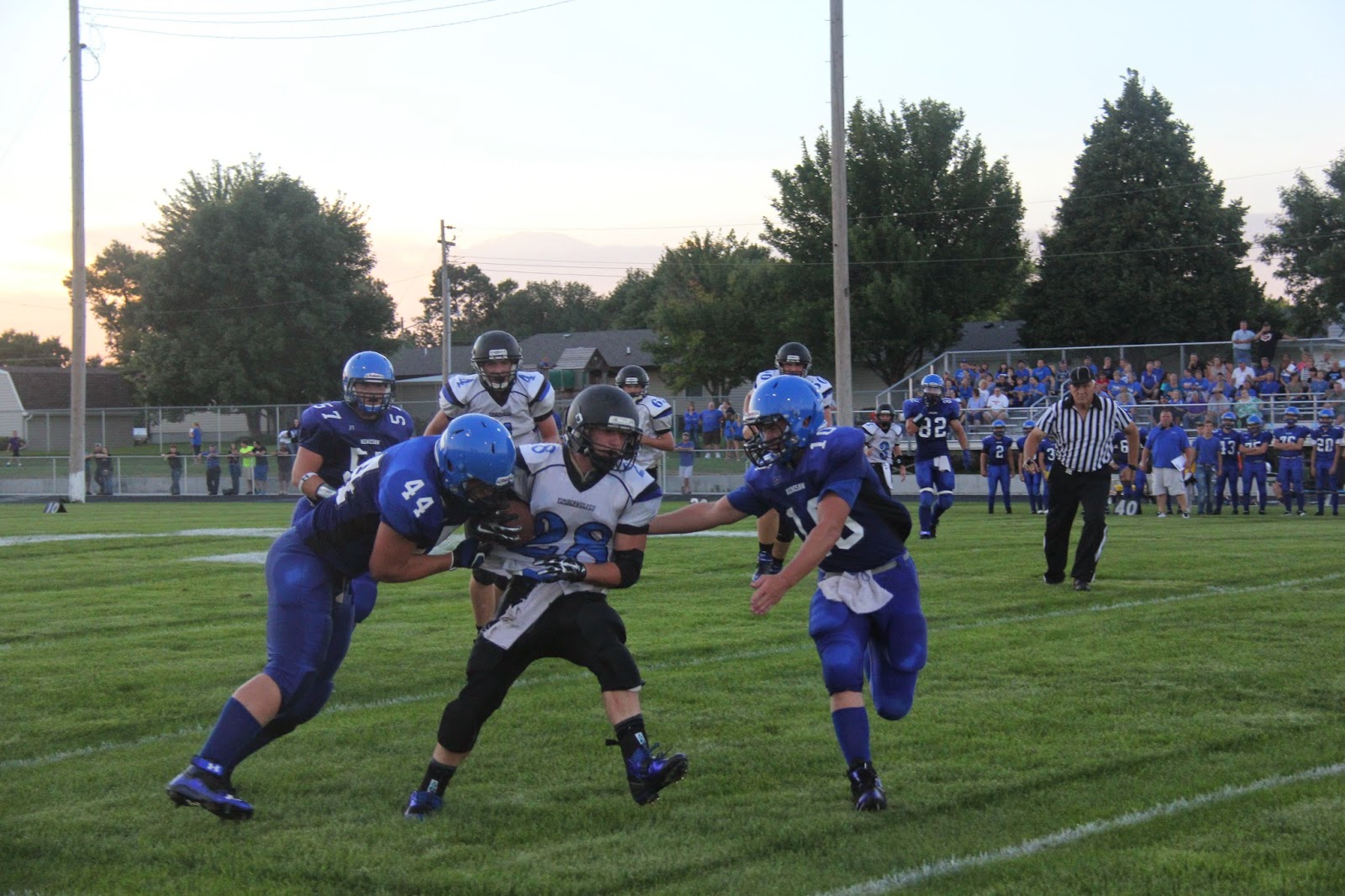 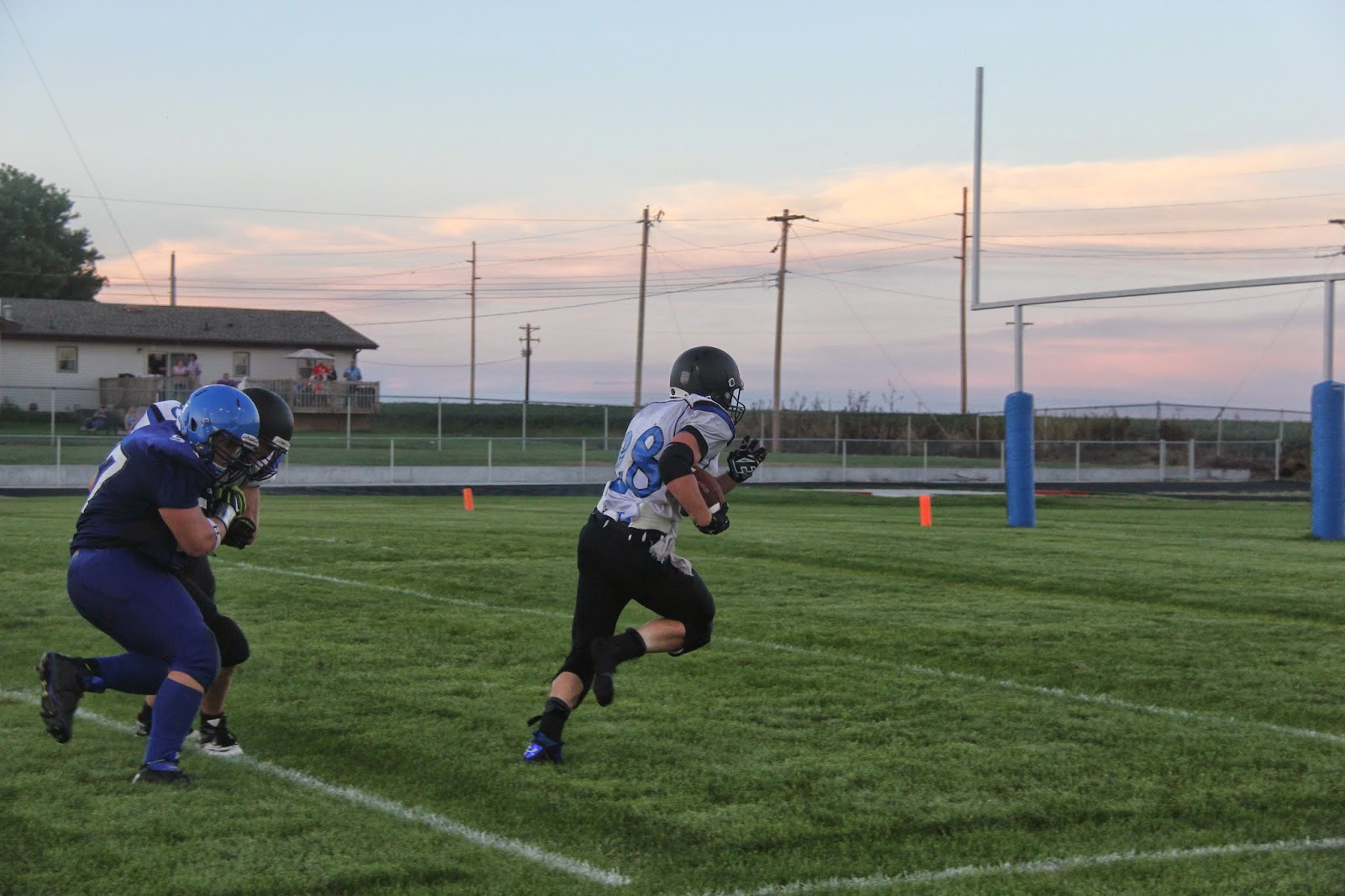 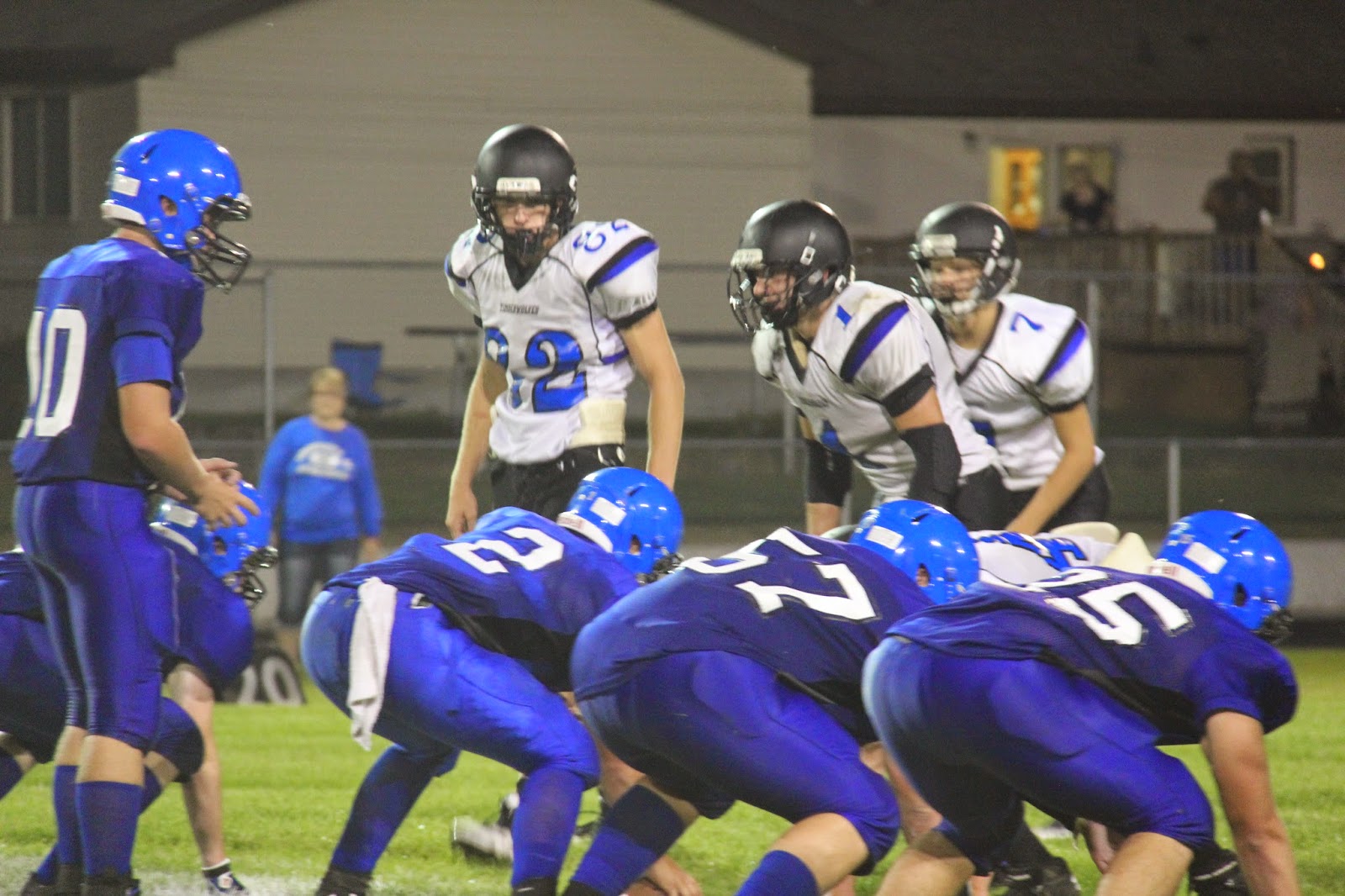 The Timberwolf fans were a little nervous as their team took the ball for the first time during the season against the Kennesaw Blue Devils especially when the first offensive drive included a T-wolf fumble.

After that little blip the Exeter-Milligan offense was on point for the rest of the game scoring shortly into the first quarter with a shuffle pass from QB Sam Zeleny to Dusty Axline.  With a score in the books the Timberwolves turned their attention to defense and over the next two defensive series caused two fumbles that they recovered, capitalizing on one of those for a touchdown.

Still in the first quarter Zeleny threw a pass to Axline for some yardage before Zeleny kept the ball to run in for the touchdown.  The T-Wolfs made the extra points with a pass from Zeleny to Jarett Maxson with 1:55 to go in the first quarter.  The Exeter-Milligan crew was up by 20-0.

With the second quarter halfway down Kennesaw finally found the end zone but the T-Wolves howled right back with Jensen breaking several tackles loose to sail home.  T-Wolves were now on top 26-6 and never look back.

Jarett Maxson again steals the ball with 4:45 left in the second quarter and with two minutes left Axline carries the ball in for two.  Jensen breaks loose but the call is called back for holding and the T-Wolves have to turn over the ball on fourth down..

After a half-time break the Blue Devils look like they are coming back roaring with a score when #20 Will Gallagher snuck up the middle.  The T-wolf defense stopped the PAT.

The Blue Devils must not have watched a lot of Exeter-Milligan film as they sent a kick off straight into the arms of running back Jensen.  And, like he has shown before, Jensen breaks several tackles loose and heads right into the end zone with 6 more points for Exeter-Milligan.

At the end of the third quarter Blue Devil Preston Schniztle breaks loose but is brought down before he reaches the end zone by Timberwolf sophomore Trevor Luzum.  Chesney takes it in to score for the Kennesaw team but they miss the point after.

The fourth quarter finds the Timberwolves still leading but giving Kennesaw a few breaks.  #23 Austin Schnitzler breaks several tackles to bring Kennesaw up to 24 still trailing Exeter-Milligan by 22 points.  The Blue Devils score on a pitch to Isaiah McChesney making the score 46-26.

The T-Wolves can’t let the Blue Devils outshine them sending Jensen down the sideline with Axline making two key blocks on the play that gives the Timberwolves six more points. The T-Wolves win in Kennesaw 52-26.
Posted by Leesa Bartu at 1:05 PM