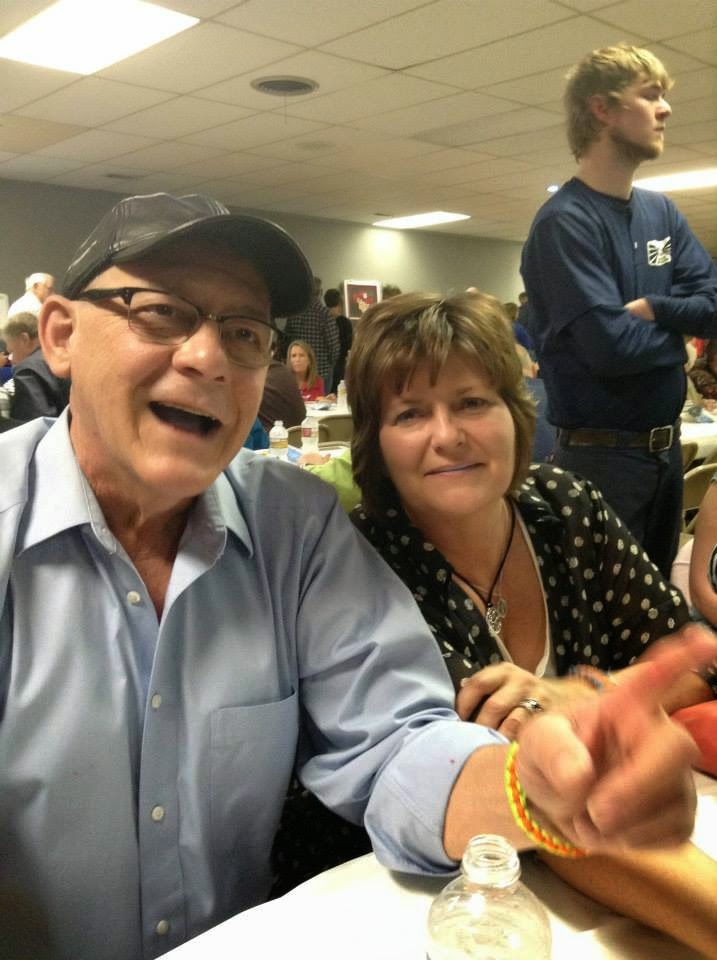 Bill and Terri Volkmer don’t know where to start on their list of thanking people.  What they thought would be a benefit consisting of “a few peanuts, some beer and a box for donations” turned into an event that more than 600 people attended.

Bill has been fighting cancer for the last 23 years.  According to his wife, Terri, this is his sixth round with the nasty beast.  A neighbor and friend, Tess Moor, has tried four times to let her organize a benefit to help the couple and after saying no a few more times they finally gave in to what they thought would be a simple affair.
Co-chairs, Barb Jansen and Moor, first concocted the event but it ballooned almost overnight.  Linda Underwood got involved as the Silent Auction chair along with Bob Mueller and Pat Becker and they ended up with 179 items to auction during the benefit.

Other chairpersons were Bob and Pat Becker who helped organize the meal, all of which was donated.  Becky Luzum took care of the facebook page which had over 500 followers in just a few days.   Chris Manning was in charge of set up and Butch and Barb Jansen headed the clean-up committee.

As the donations came in Mary Burgess and Becky Luzum drove the area picking up silent auction items and passing out posters.  “So many helped with getting things ready for the event,” explained Moor and Jansen.
The Legion in Exeter began to fill up on Saturday, April 5th even before the meal began. The crowd included friends of the Volkmer’s from Kansas, Colorado, Illinois and Iowa in addition to the locals from Exeter and surrounding towns.  Even the silent auction items came from all over the nation.

The Volkmer’s “stopped by” for what turned out to be three hours of the evening. “We’re very humbled.  It was an experience.  We have been blessed to have so many people who care about us in this community and beyond.”

Bill was so moved by the incredible outpouring of love he and Terri felt, “I had a tremendous good time and got to see a lot of people that I don’t see a lot of.”

Organizers Jansen and Moor agreed, “It takes a great community to pull off an event like this.”
Jansen added, “I have never been so proud of our town.  I don’t think we’ve ever had a benefit like this before.  It was wonderful that so many people wanted to help.”

Moor stated, “We never had any problem finding people to help.  It just kept getting bigger and bigger.  It took good committees and good dedicated people who wanted to work.”

Underwood was excited to be a part of the event noting that the Volkmer’s “ would be the first ones here if it was somebody else.  There are so many things they have done for the community that I was glad to see this happen.”

The Volkmers are so thankful for the event, “We appreciate it so much.  Although we have insurance, there are still so many costs associated with the treatment.  So many that aren’t covered by insurance like the travel to get chemo and the food while we are there.  The money will be put to good use.”
Right now Bill and Terri are focusing on Bill’s health, but “We’re still kind of in shock from the overwhelming generosity, but we plan to pay it forward.  The wheels in my head are turning,” explained Terri.

Earlier this year, John E’s held a chili cook off with all of the proceeds going to the Volkmer’s.  There are also paracord “Bracelets for Bill” that are made and sold by Courtney and Alyssa Naber in York.  They are the daughters of the Volkmer’s nephew and Alyssa is their goddaughter.

In addition another committee member, Nancy Jensen, is working with Thrivent to get some matching funds.  There is an account set up for the Volkmer’s at Generations Bank that will be open for donations until the end of the month.