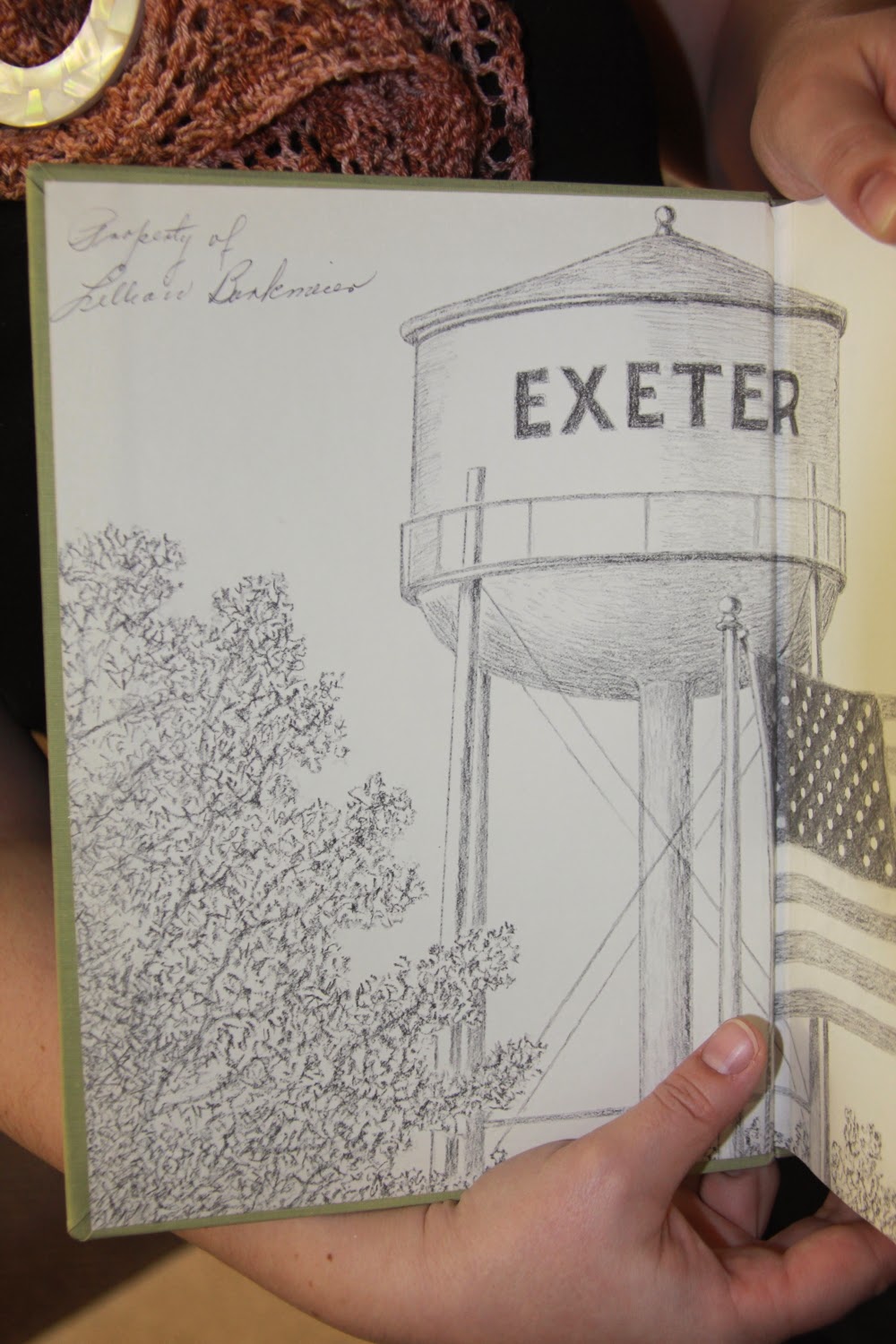 Little did Karen High know what she would find when she received a donation of 12 boxes of books from Alice Barkmeier and her late husband Ray.  High works in the Technical Services division at Chatham Public Library in Chatham, Illinois.

In the large collection that the Chatham Public Library received from the Barkmeier’s there was a very special volume, the first Exeter history book titled “This Is Exeter.”

When High discovered the book and found the inscription inside the front cover announcing that it belonged to Lillian Barkmeier she began to dig around a little to find out more about the book. “I enjoy local history so I knew it would be important,” explained High.

While she had never heard of Exeter she knew she wanted to get the book back to its home.  “I did a little research to find out about the family and was able to find Ray’s tombstone in Florida but not a connection to Lillian.”

It was when she found the obituary for Ray’s parents that she found that Lillian was his sister.  High found Lillian’s obituary along with a beautiful tribute written for her by former Exeter Librarian Henrietta Harre.

“We have a local history and artifact museum room in our library.  Whenever something comes in that would be a treasure where it is from we make sure to try and get it back.  Sometimes we will get three, four or even five copies of the same unit and we just store the extras. If it’s not printed anymore we save them in case the originals disappear or get damaged,” explained High.

Once she found the proper home for the history book she contacted Exeter Librarian Jessica Votipka to see if the library would be interested in the copy of the book.

Votipka was thrilled to get the phone call and also to get the book in hand, “They [Chatham Public Library] really went out of their way to the book to us and it is beautiful condition, probably the best condition compared to the ones we already have.”

Currently the Exeter Library has two copies of the historical volume but both are beginning to show their age.
“The books are reference history and they are so important to the community.  People refer back to them all the time so it’s great to have enough copies to ensure that we always have one.  If one gets out of shape or damaged it’s good to have back up,” explained Votipka.

Two of the Barkmeier’s nieces live in the area, Barb Heffelfinger and Suzanne Johnson, both were surprised by the donation but glad that the book was returned home. They both looked forward to talking with Alice who is in her 90’s but “very sharp,” according to Heffelfinger.

Votipka is so thankful to have another copy as the library often gets patrons, both local and out of the area, who stop in to find information that is contained in the Exeter book.  She hopes to return the favor one day, “It kind of shows how the bond between librarians is strong, we help each other out.  Apparently it transcends geographical border.  It inspires you to pay it forward to other libraries and your patrons along with the community.”

High was also able to forward a history book about Hampton, Neb. Back to the historical society in Hamilton County.

below: Exeter Librarian Jessica Votipka holds the copy of “This is Exeter” that was given to the library through the Chatham Public Library. 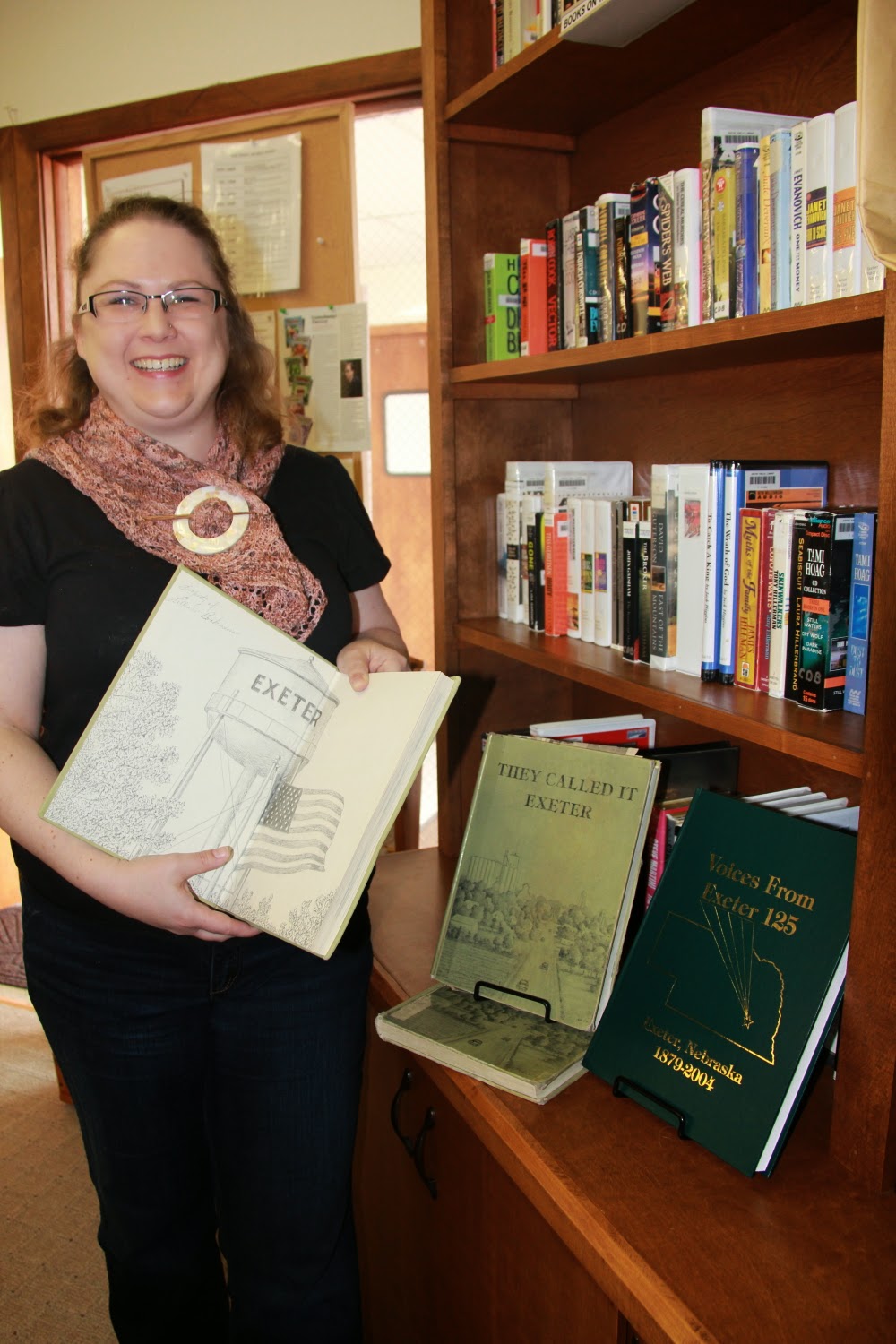