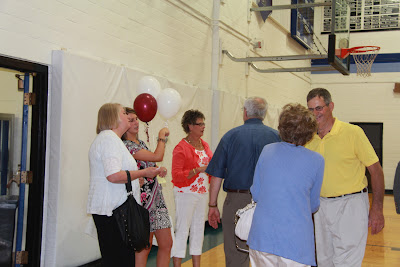 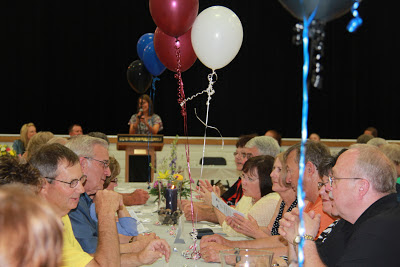 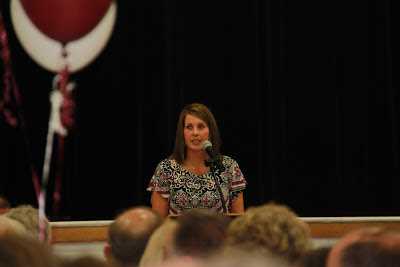 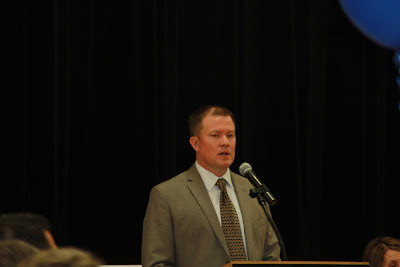 One of the MC's Jeremy Becker.

Exeter and Exeter-Milligan alumni had a full weekend of activities and plenty of opportunities to reminisce about their high school hijinks.

The first event for the weekend was the First Annual Adventure Dash, a fun run with hydration stops that were only for those 21 and over.  The route, which took the runners past some of their favorite spots in town, was close to a 5K when it was run twice.  There were five hydration stops.  Some were more elaborate than others but all had a challenge that had to be completed so that the runners could move on. At one stop, the runners had to walk with a lime between their knees and place it into an empty coconut.  At another stop they had to write down their favorite teacher at Exeter-Milligan and also who their first kiss was with.

Many of the classes had private parties scheduled for Friday night but for some the hotspot was karaoke at John E’s.  This tradition has continued through the years and many of the alum and their spouses enjoyed the evening.

Saturday activities included a golf tournament in Geneva with just three holes being played because of rain.  The first place team was Shellie Olsen, Austin Waldron and Morgan Brandt with the second place team consisting of Jalen Maxson, Brady Bristol and Zach Jensen.

Saturday evening before the banquet, several of the members of the Exeter-Milligan junior class gave tours of the school to anyone interested.  The banquet was held in the Exeter-Milligan gym with many classes represented.  The oldest class representative was Alva Smith, class of 1938.  Travelling the furthest was a tie with Mindy Wiemer, class of 2003, coming from Seattle, Wash. and Carol Dumpert Aiden who came from San Diego.

At the banquet the four faculty and staff who retired this year, Mrs. Polak, Mrs. Votipka, Mrs. Tauriella, and Mrs. Michl were recognized with a round of applause.

After a meal catered by Evening with Friends, each class had the opportunity to introduce themselves and share any memorable experiences their classmates recalled.

The business portion of the meeting was presided over by Cara Songster Stoll, president of the class of 2003.  Sue Kittinger and Jeremy Becker shared the master of ceremony honors.  Kittinger also brought up the new business of how the future of the banquet will be planned as the banquets are now being planned by Exeter-Milligan graduates.

Alan Songster spoke on behalf of the Exeter-Milligan schools foundation which gave $20,000 in scholarships this past year.  “We have also given to enhance the education opportunities at Exeter-Milligan through the music program, the laptop computer program, toward the new scoreboard at the football field and the new curtains for the stage.”

After the close of the evening, attendees were invited to the dance held at the Exeter American Legion Home.

Exeter and Exeter-Milligan alumni also enjoyed a road rally on Sunday afternoon following clues that led to some of their favorite high school haunts.
Posted by Leesa Bartu at 7:30 AM