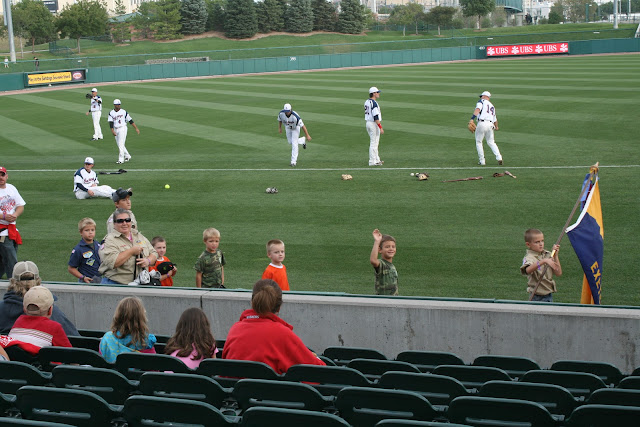 Parading before the Saltdogs game the Exeter scouts are led by Blake Meyer (holding the flag) on the far right and then from right to left are Devin Harrison, Troy Kallhoff, Mikey Bartu, Josh Meyer, Cubmaster Leesa Bartu, Ben Bartu and Den Chief Joey Bartu.


Members of Exeter Cub Scout Pack 218 enjoyed a trip to a Saltdogs game and campout last weekend.  Six scouts and their parents along with Den Chief Joey Bartu attended the evening game at Haymarket Park.

Before the game, the scouts paraded around the field with their pack flag and then stayed on the field for the opening events.  Bear den member Braden Capek was chosen to be a watchdog for infielder #7 David  Espinosa.  Capek got a baseball from the Saltdogs and got to go out on the field with Espinosa who signed his baseball.

During the game the scouts played baseball bingo, paying attention to each event in the game so they could mark it on their bingo cards.  The Saltdogs were tied 5 and 5 in the bottom of the ninth and with a runner on base a home run was hit out of the park giving the Saltdogs a 7-5 victory.

Immediately following the game the Saltdogs hosted an amazing fireworks show before the scouts and their siblings were able to run the bases.

After base running anyone who wanted to stay could get their tent and sleeping bags out of their car and set up on the outfield.  A program on disc golf was held and a movie played on the big screen before lights out at 1 am.  Wake up call was at 6:15 am and tents and personal belongings were removed from the outfield before the scouts and parents picked up anything left on the field.  The scouts enjoyed a catered breakfast before leaving the stadium.
Posted by Leesa Bartu at 7:30 AM