New and Improved at Exeter-Milligan Schools 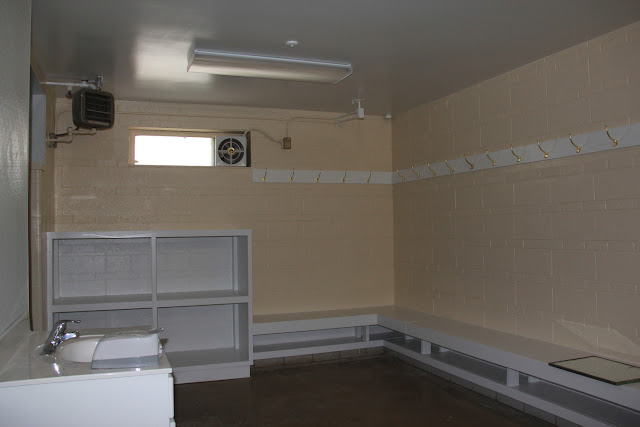 Update has been the name of the game at the Exeter-Milligan schools this year.

Some of the changes are obvious like those at the Exeter campus.  The most noticeable being the new paved parking lot across the street from the gym.  An abandoned home was torn down and the lot was leveled and paved.  It is being used by students, staff and visitors and will help handle the overflow during special events.

Some of the biggest changes have happened at the Milligan campus.  This summer work was done to renovate the locker rooms at the Milligan campus. Some updating was needed as this location is used for all home football and volleyball games.  The Exeter-Milligan School Board building and grounds committee outlined a plan to revamp the two locker rooms in order to accommodate the teams using the facility.

The plumbing for the shower facilities was reworked, the locker rooms were painted and new lockers and benches were installed.  Also new are the sink, vanity and light fixtures.  Around $20,000 was spent on the remodeling project.

For those attending football games in Milligan will be surprised and impressed with the new crow’s nest at the field.  “The old facility was original and was starting to have structural issues.  It had become a safety concern. We had planned to replace the crow’s nest two years ago but we never got to it,” explained Superintendent Paul Sheffield.

The all new three story structure should be ready for use during the first home game, September 14.  The structure will have storage on the first floor with reserved seating on the second floor and space on the  third floor for announcers and coaches for both teams.  “The plan is to raffle off the seats on the second floor for each game and most likely we will auction off the seats for any play-off games.” Said Sheffield.

Other updates include four more new smartboards installed this summer.  Each classroom now has a smart board at both campuses.

Some maintenance issues were addressed in Exeter including replacing the dishwasher at the Exeter site (it was forty years old) along with some of the rooftop heating and ac units that needed to be replaced.
Two projects that the Exeter-Milligan Booster Club contributed to were new stage curtains on the Exeter stage along with a new fitness themed playground equipment at the Milligan site.  The equipment has arrived and will be installed soon.
Posted by Leesa Bartu at 12:12 PM