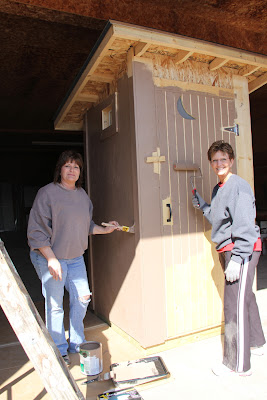 Terry Volkmer, left, and Linda Underwood, right, finish up the final touches on an outhouse that will be auctioned at the Cattleman's Ball in June. 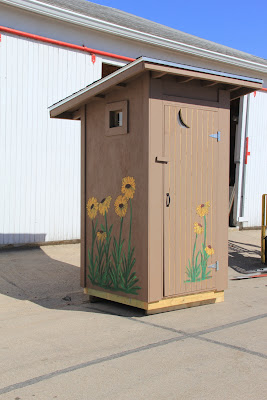 The finished out house.
Maybe you've noticed the outhouse in town? It's a real outhouse, really!
The outhouse was the brainchild of Linda Underwood.  Linda, who is a volunteer on the silent auction committee, had heard rumors for years that they would love to auction off an outhouse.  She approved the Exeter Chamber of Commerce to see if they would donate the funds for the supplies to build the outhouse.

Once the Exeter chamber agreed to sponsor the outhouse, Underwood contacted Exeter Lumber who donated their time to construct the outhouse.  Terry Volkmer and Linda tackled the beautifying of the outhouse which included the names of all of the businesses who are members of the Exeter Chamber along with beautiful sunflowers painted on the outside.
During the June 1 and 2 Nebraska Cattlemen's Ball which will be held in McCool Junction, the outhouse will be auctioned off during a silent auction.
Posted by Leesa Bartu at 10:05 AM