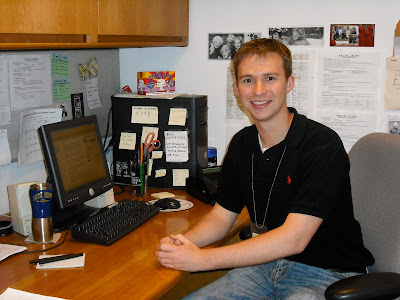 Concordia alumnus Carson Stokebrand showed his documentary, “The Truth about Rosa,” and discussed his professional experiences at a presentation hosted by Concordia’s broadcast journalism class. The documentary will air on NET in November.
EWARD, Neb. – Concordia University, Nebraska alumnus Carson Stokebrand returned to campus Thursday, Sept. 15, to share “The Truth about Rosa,” his twenty-two-minute documentary on immigration in Nebraska. Stokebrand also discussed the work that went into the film and his own experiences in broadcast journalism.
A shortened version of the documentary will air on NET television’s “Nebraska Stories” in November.
“I just wanted to do a project on some sort of issue that was important to Nebraska, and this year it [immigration] has been an especially timely topic,” Stokebrand said.
After graduating from Concordia in 2009 with a Bachelor of Arts degree in communication and history, Stokebrand enrolled in the Master of Arts in journalism program at the University of Nebraska-Lincoln. He produced “The Truth about Rosa” as part of his master’s degree studies in broadcast journalism.
Stokebrand spent the summer of 2011 putting together his documentary, which follows the daily life of an undocumented immigrant and a young English tutor who befriends her. The documentary portrays the hardships of immigration and presents opposing viewpoints of Nebraskans in several communities affected by migrant workers.
“It started out as a human interest piece about the two of them and from there it grew. I decided I needed to get people who could talk on the issue more broadly, some who are strongly against it and some who are strongly in favor of undocumented immigration,” he said.
Stokebrand hopes his documentary will give perspective to those who see it. “It’s a messy issue, and there’s no right or wrong. Until you go and actually meet them, you never put a face to it and realize they’re actual people.”
Stokebrand has plans to continue on a path in broadcast journalism. After earning his master’s in 2011, he received job offers from NBC, ABC and NPR. For the next four months he is working as a production assistant for ABC in New York and then will be moving to a position at NBC.
Information and photo courtesy of Concordia University
Posted by Leesa Bartu at 5:25 AM