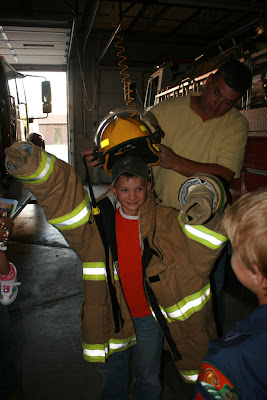 Marcus Krupicka tries on fire gear with the help of Fireman Mark Beethe while Ben Bartu looks on. 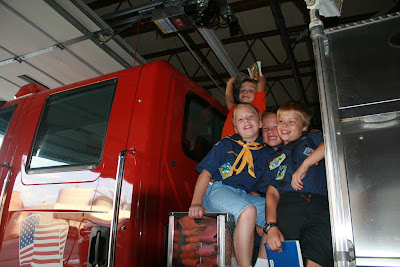 Exeter Scouts enjoyed climbing all over the fire trucks at the Exeter Fire Hall.  Back row is Tiger Cub Marcus Krupicka.  In the front are from the left Wolf Cubs Braden Capek, Alec Schlueter and Ben Bartu.
Exeter Tiger and Wolf Cubs enjoyed a tour of the Exeter Fire Hall with Fireman Mark Beethe.
The scouts first spent some time with Beethe learning about what to do if there is a fire in their home.  Later during the evening the scouts drew a picture of the layout of their homes and planned a fire escape route.
After learning about how to react to a fire in their homes Beethe showed the boys what a fireman looks like in full gear so they would know not to be afraid of a fireman in the event of a fire in their home.
The scouts were also able to look in all the fire trucks and see the gear. Beethe and Fireman Lin Schlueter explained to the boys how some of the equipment works and what it is used for.
The scouts also got to see inside the ambulance and ended the evening trying on fire gear.
Posted by Leesa Bartu at 5:22 AM