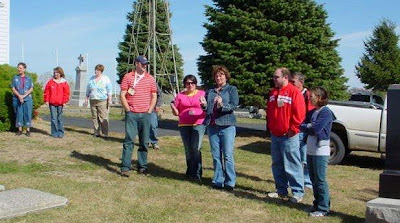 FILLMORE COUNTY - The Odegeo…Leadership for Fillmore County class visited many historical and tourist sites throughout the county during their October 19th session.
The class met at Dempster Woods Bed and Breakfast. Sandra Lefever, their host, told about the history of Dempster Woods and their bed & breakfast business. She also furnished muffins and coffee for the group.
Next they visited the Strang Museum where Janet Lentfer told some of the history of Strang. They toured the Fairmont Air Base as Doug Rung told stories of the soldiers that were based there and the history of the WW II Army airbase. The class toured to the Fillmore County Museum while in Fairmont and listened as Doug Rung and Wanda Margot told of several new items that had been added at the museum.
The group had lunch at St. Stephen’s Parish Hall sponsored by York State Bank of Geneva. The group then toured the historical St Stephen’s Catholic Church. Agnes Anderson gave details of the 2002-2003 renovation of the church.
The group traveled to the Cesky Bratri Cemetery near Milligan. Officers of the Cemetery Association explained the significance of the chapel and cemetery to the early pioneers and the people of the area. Many in the class tried their hand a grave witching.
The group stopped at the historical markers on Hwy 41 outside of Milligan and then visited the Milligan Auditorium, where Shirley Brunkow gave details of the WW II markers and Scott Oliva told of the history of the historical Milligan Auditorium. Later refreshments were enjoyed at Ron’s Tavern in Milligan.
From Milligan the group traveled to Lonestar NRD Recreation Area. General Manager Mike Onnen from the Little Blue Natural Resource District told the history of Lonestar. Traveling back to Geneva, the group took in Bob & Joan Ackland’s Meriwether Park. Bob told how the Meriwether Park name came about and the development of the park.
The November session of the ODEGEO class will focus on Government.
Persons interested in learning more about Odegeo…Leadership for Fillmore County may contact the Development Corporation at 759-4910, email lentfer.fcdc@genevamail.com or go to www.fillmorecountydevelopment.org.
Posted by Leesa Bartu at 9:13 AM