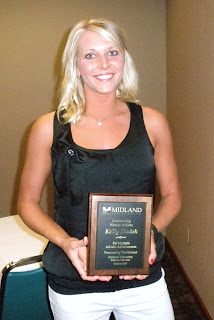 Kelly Sladek, of Cordova, was presented the Outstanding Woman Athlete Award at the 2010 Athletic Hall of Fame Induction Ceremony at Midland University, in Fremont, Neb.  Kelly , a 2010 graduate of Midland and a 2006 Exeter-Milligan graduate, was a four year starter for Midland in softball.  As a pitcher, Kelly currently holds career school records for innings pitched (616.0) and for strikeouts (705).  She also holds the season school record for ERA at 1.23 in 2009.  In 2010, Kelly led Midland to their second ever berth in the NAIA National Tournament.  She recorded a career-high 196 strikeouts in 164 2/3 innings in 2010, an average of 8.33 strikeouts per 7 innings.  For her career, Kelly averaged 8.01 strikeouts per 7 innings.  Kelly earned First-Team All-Conference honors in 2007, 2009 and 2010.  She received Second Team All-Conference honors in 2008.  In 2009, Kelly was also selected Conference Pitcher of the Year and she received NAIA Honorable Mention All-American Honors.  Kelly is the daughter of Bill and Tammy Sladek of Cordova, and she is presently teaching in the Fremont Public Schools.
Posted by Leesa Bartu at 10:25 AM