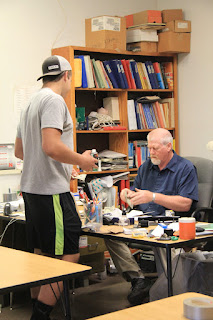 Dean Filipi checks Marcus Krupicka out of his class on the last day of his 39 year teaching career at Milligan and Exeter-Milligan. 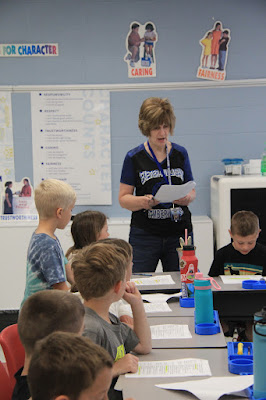 Marla Weber reads a play about pioneer days with her second graders on the last day of her 40 year teacher career at Exeter and Exeter-Milligan.

Marla Weber starting teaching in Exeter in 1981 and actually ended her career where it started. She taught second, third and fourth grade for the Exeter and continued on for Exeter-Milligan.

Weber even did her student teaching in Exeter in the second grade.  She taught fourth for one year and taught third grade for most of her career returning to second grade the last third of her tenure.

She didn’t have any illusions about what teaching would be like when she started and felt that “teaching keeps you young. You’re working with all of this excitement coming through all of the time. . .One of the things I’ll miss the most is seeing the kids coming around the corner in the morning all ready to start the day, faces beaming all ready to tell you a story.”

When asked what the most important thing she taught in second grade was, "learning never stops" and she tried to "instill the love or passion for learning for all students. I always tell students there are SO many ways to learn too (classes, of course but also traveling, reading books, making observations, asking questions, working with others, etc.). Another important lesson to learn is when we think we ‘failed,’ it actually is an opportunity to learn because of that mistake.”

She didn’t anticipate the changes that she has seen in education both in the cycles of learning and how material is presented but most of all the changes in technology.  Weber has embraced technology in the classroom.  “Just for them to be able to access it at a young age and know how to do it. . .they are not afraid of technology at all.”

But it wasn’t all about technology in her classroom. She always scheduled the annual Outdoor Education day at the beginning of the year.  The class spent the day at the park learning about nature and their senses with the help of one of the high school science classes. The end of the year brought pioneer school day when the class traveled to the Saline County Museum in Dorchester and experienced a day like the way their great-great –great grandparents might have learned.

“At the beginning of the year I wanted to capture their attention and love of learning and at toward the end we wanted to finish strong,” explained Weber.

Exeter-Milligan superintendent Paul Sheffield described Weber, “When one thinks of a master teacher, a picture of Marla Weber should come to mind.  Over her 40 years of teaching, she has made an impact on each and every student and teacher.  She was always willing to do what was needed to meet the needs of all students, even if that meant more time and effort on her part.  She will be missed by all of us. My only wish was that my own kids could have had Marla as a teacher. ”

Weber plans to spend lots of time with her grandson and travel during her retirement.

Also retiring from Exeter-Milligan is Industrial Arts teacher, Athletic Director and Coach Dean Filipi.  Filipi has also taught in the Milligan and Exeter-Milligan district for the past 39 years.

Filipi didn’t want to go on record about teaching but wanted to slip under the radar with no one noticing his departure.  At the last home game for the boy’s basketball team he was honored with a Timberwolf jersey and with multiple former players gathering to thank him for the way he shaped their lives and their careers.

Sheffield commented, “Dean may not be the warm and fuzzy type of teacher and coach, but he truly has the best interests in mind of his students and athletes.  Over his 39 years of teaching and coaching, he has helped mold his student/athletes into responsible young adults.  His impact on the students and staff will be felt for generations to come.”

“Both of these retirees exemplify what is right with education.  Each has made their impact on the world but in their own unique ways.  I wish them the best of luck in their new endeavors and hope they will always have fond memories of their time at Exeter, Milligan and Exeter-Milligan. Fun fact: NEITHER has taught anywhere else!”

Exeter-Milligan Principal Laura Kroll commented, “It’s a real rarity to hear of teachers retiring after being in education for 39 or 40 years, buts it’s even more rare when all those teaching years have been in the same school district. I think that alone is a true testament of Marla and Dean’s devotion not only to our school but also our communities. It’s been quite apparent based on the student, parent, and player reactions, upon the announcement of Mr. Filipi  and Mrs. Weber’s retirement, how much these two individuals have touched the lives of so many. We have hired teachers in their absence, but Dean and Marla can never be replaced. You just don’t replace family!”