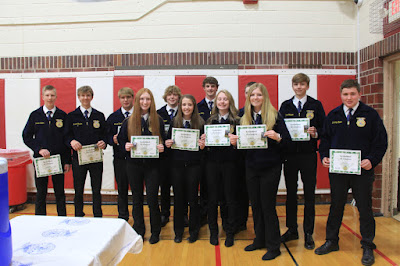 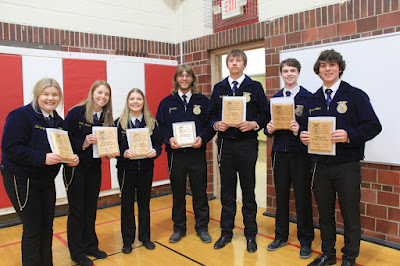 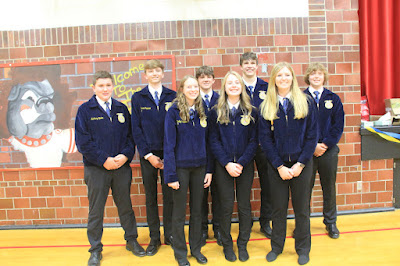 2022-20223 EMF FFA Officers were introduced.  Pictured in the back row from the left are: Zach Spohn, Chase Paulsen, Jacob Weber, Chase Svehla and Will Vyhnalek.  Front row from the left Shelby Lawver, Reagan Bartley and Ella Archer. 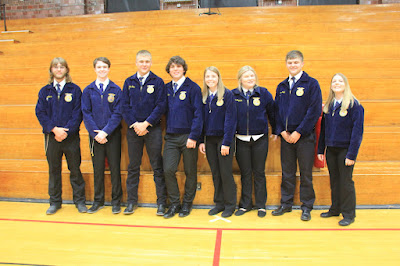 The evening was filled with special moments recognizing the achievements of the FFA students.

After introducing the officers and an invocation by Christian Weber the attendees enjoyed supper together.

After the meal the officer team was introduced and chapter president Vivian Weber presided as the Discovery degrees were presented to the junior high members.

Zach Spohn was recognized with the Star Greenhand degree.  Chapter FFA degrees were presented next with Spencer Eberspacher, Jacob Weber and Shyann Smith receiving their degrees.

The outgoing officer team was recognized along with their parents.  The officers presented a beautiful bouquet of flowers to their advisor Mrs. Amy Kohtz and she spoke briefly about the hard work and dedication the officers gave to the chapter this past year.

The graduating seniors were honored with a video slideshow as they hung up their FFA jackets one last time and thanked Kohtz.