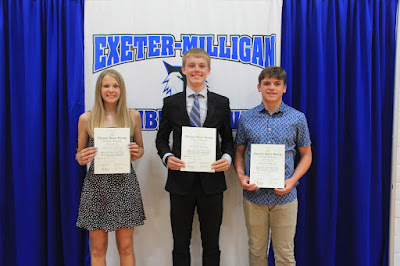 Exeter-Milligan held their annual honors night on Tuesday, May 3 in the Exeter gym.

Emma Olsen welcomed the crowd before initiating the National Honor Society Induction.  Current NHS members presented the tennets of the society and all current and new members recited the NHS pledge.

Mrs. Brandi Perez recognized the journalism students and talked about their efforts on both the school newsletter and the yearbook. 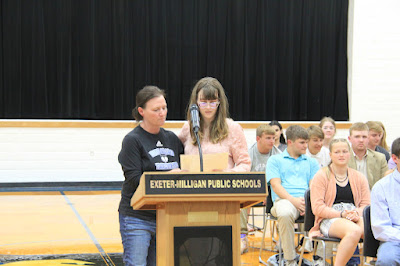 Mrs. Lisa Kanode recognized the art students along with the volunteers at Family Art Night, and those whose artwork was displayed at the Capitol art show this year.  She presented the most improved artist award to Maddie Luzum and the Artist of the Year to Becca Krupicka.

Mr. Jordan Marr talked about the successes of the junior high and the high school quiz bowl teams.  There were 16 junior high members competing and 13 high school members.  He recognized the three seniors who had participated in quiz bowl for four years, Ben Bartu, Braden Capek and Wesley Ronne with special backpacks.  He also noted that sixth grader Deacon Erdkamp had placed first in the Fillmore County Spelling Bee.

Mr. Mark Perez recognized the choir members and the participants in the junior/senior high band. He presented the Directors award to Selah Petersen, the eighth grader with the most band points and the John Phillip Sousa Award outstanding senior was given to Braden Capek.

Mrs. Kara Meyers talked about the opportunities for the speech team this year as this was the first year that she and Mr. Brian Murphy were coaching the team.  Both Troy Kallhoff and Kmila Benitez qualified for State Speech this year.

Mrs. MaryLou Vossler introduced the Family Career and Community Leaders of America participants and officers.  She briefly reviewed the service projects the group has participated in this year.  She also recognized Joleen Vossler with the gold medal she received at both district and state level for project on eating disorders.  She introduced the chapter officers for next year and also Kierra Papik who serves as a district officer. 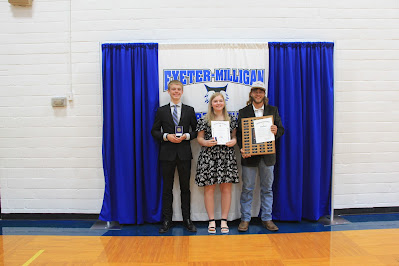 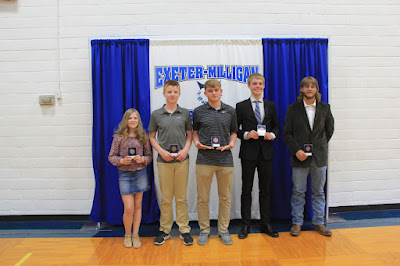 To end the evening the seniors were presented their very generous scholarship packages.