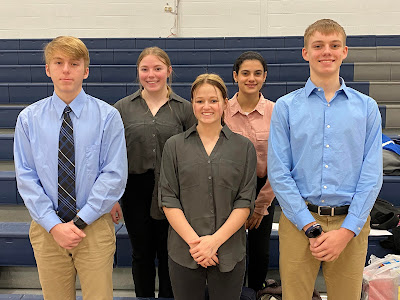 After the first scheduled meet of the season was canceled due to weather, the Exeter-Milligan speech team opened their season on Saturday, January 29, at the MUDECAS conference meet held in Humboldt. About half the team's members competed at the meet. With only one returning team member from last season, the participants got a taste of competition in the first round. During the second round, all their performances were much stronger and more confident. In duet acting, Jozie Kanode and Morgan White finished just out of the medal round. Exeter-Milligan had one entry advance to finals. Troy Kallhoff finished fifth overall in extemporaneous speaking. The next competition for EM will be on February 12, when they travel to the Median Invite.

Pictured from left to right are those who competed at the MUDECAS meet: Braden Capek, Morgan White, Jozie Kanode, Kmila Benitez, Troy Kallhoff.