The Exeter-Milligan speech team traveled to Hampton on Wednesday, February 23, to compete in the CRC Meet, which was originally scheduled to take place at Meridian. During the preliminary rounds, almost all of the EM entries performed very well. However, the entries from other conference schools were performing at a high level as well. Troy Kallhoff was the lone qualifier for finals for EM. In the finals of extemporaneous speaking, he finished with a strong performance, earning second place.

A few days later, the Exeter-Milligan speech team was again competing. This time at a Saturday meet in McCool. Again, there was very good competition. Kmila Benitez was only a few spots out of the medals, finishing ninth in humorous prose. At the McCool Meet, Troy Kallhoff advanced to the finals, bringing home a fourth place medal in the extemporaneous event. The Exeter-Milligan speech team will be preparing for the District Meet, which will be held on Friday this week in McCool. 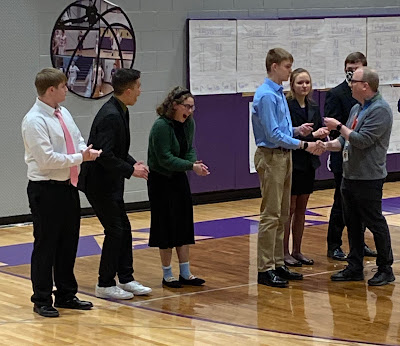