Cudaback Wrapped in Quilt of Valor 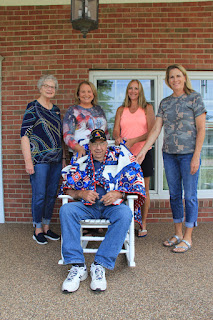 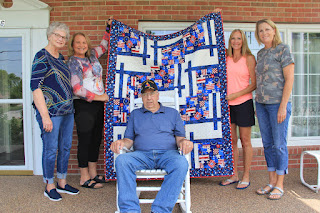 On Tuesday, July 20, Exeter resident Larry Cudaback was draped with a Quilt of Valor by his wife, Bonnie and daughters Darcy White, Dawn Welch and Stacey Hall.

Pat Becker a member of the Quilt of Valor program presented the quilt to Cudaback. Becker sewed the quilt top which was machine quilted by Diane Henke and bound by Becker.

The beautiful patriotic themed quilt was wrapped around Cudaback on their front porch.

Becker explained that the program was started in 2003 when QOV founder Catherine Roberts’ son was deployed in Iraq.  A dream gave her the idea that quilts from home would be comforting to those serving and so she began to make them to award to active military along with veterans.

Roberts created a non-profit foundation to guide the project.  Since 2003 over 275,000 quilts have been awarded to those who have served.

Becker added in presenting the quilt, “As a grateful nation to thank you for your time in military service. . .and for putting your life on hold for serving your country.”

Cudaback served in the Army in Germany after World War II.  He enlisted in November of 1959 and did his basic training Fort Hood, TX and then Fort Knox, KY.  He was shipped to Germany and was stationed at Erlangen, Germany for his entire military career.

He did not come back to the states at all during his deployment.  During his leave time Cudaback explored Europe.  Cudaback learned a lot during his time in the service, “I grew up, it was a good experience.  I learned to pay attention and learned neatness.”

He served in Company B, First MTB (Medium Tank Division), 35th Armor, Fourth Armor Division. He was a tank commander and described many 72 hour training exercises with no sleep that he did each year.

Cudaback spent three years in Germany and was discharged in November of 1962 where because of the Bay of Pigs incident he got to fly home instead of spending nine days on a boat crossing the ocean.

Cudaback felt “very honored” to receive the quilt of valor.  He plans to display the quilt in his home.

Again Becker thanked Cudaback for his service, “Use this quilt. Don’t put it in a box.  We want you to be comforted by the quilt. Mere words cannot express thank you for putting your life on hold for the fulfillment of duty to a thankful nation.”