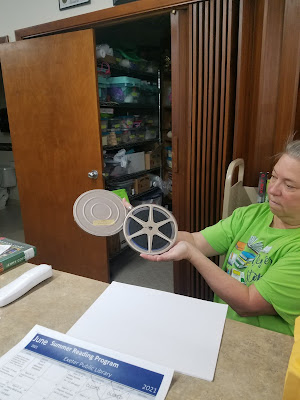 Exeter Librarian Lynette Trauger found a film canister while organizing a closet at the library.  The film, once transferred to DVD, showed three parades from Exeter’s Centennial celebration in 1979.

A lost treasure is not exactly what you expect to find tucked away in a library closet.

As part of her duties, Exeter Librarian Lynette Trauger was organizing a storage closet in the library when she came across a film canister labeled “3-Centennial Parades.”

Not sure if the film was good any more or if it even contained any relevant materials she sent it off in faith to have it converted to a DVD, “I had no idea what was on it,” explained Trauger.

When it returned she played the DVD and found about 15 minutes of footage from three parades that were held during the Centennial Celebration in Exeter, June 29, 30 and July 1, 1979.

“To me it goes really fast.  There is no way to slow it down or it would lose its authenticity. You really have to watch it with someone who was there,” added Trauger.

Exeter Village Clerk Becky Erdkamp, who was in elementary school in 1979, remembered the weekend with fondness and was thrilled to watch the film of the parades.

“It brought back lots of memories.  It was fun to see the amount of people it brought to town.  Seeing the old cars and crowds, the participants in the parade and the people who came to town brought back some great childhood memories.”

The film shows the three parades that were part of the Exeter Centennial Celebration including the Friday afternoon’s Children’s Parade with Nebraska’s own Kalamity Kate as the grand marshal, the Centennial Parade on Saturday and the Antique Car Parade on Sunday.

There are a few clips of the barbeque held Sunday evening as well.  The Exeter history book, “Voices from Exeter 125” includes the copy of the newspaper article about the parades.  It reports that there were over 100 children in the Children’s parade, the Centennial parade had 120 entries and the Antique Car Parade had 77 entries.

Where the film came from and who recorded the parades is still a mystery.  In talking with both Judy Dinneen and Gladys Petersen, who along with their husbands, were in charge of the Centennial parade, neither remembered anyone specifically filming the parade.

The library is selling DVD copies of the film for $10 each and Trauger will be in the library on Saturday, May 29 from 1 -3 which is during alumni weekend. Proceeds from the sale of the film will support the libraries projects.