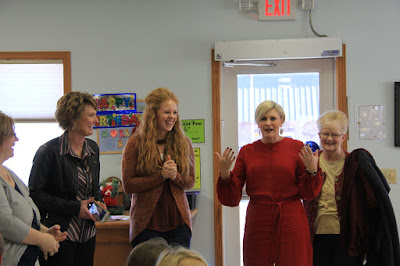 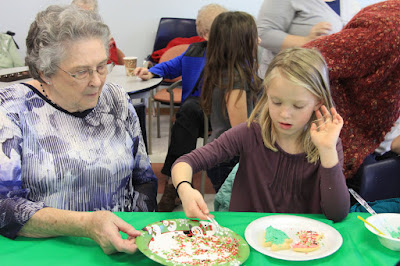 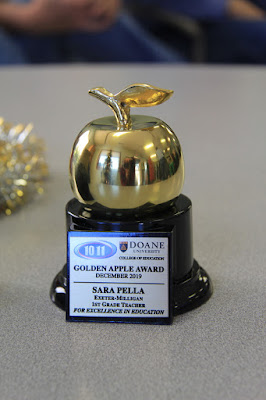 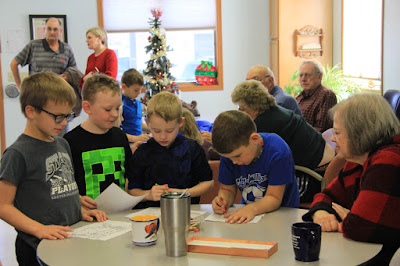 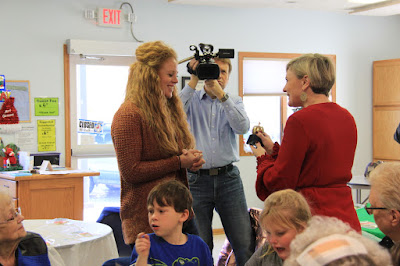 Taryn Vanderford (left) presents the Golden Apple Award to Sara Pella while Jon Vanderford films the moment for a 10/11 segment.

Their teacher, Mrs. Sara Pella, had been nominated for the 10/11 News Golden Apple award.  News personalities Taryn and Jon Vanderford were in Exeter to present the award to Pella for her dedication to making a difference in the community and her students.

“The students love going to the Senior Center. We have had a bigger turn out (from the senior citizens) each time we have gone this year, which is great, because I know the Seniors love it just as much, if not more.”

The relationships the students form with senior citizens continues outside of the senior center according to Pella,  “When the students are outside of school and see someone they have visited at the senior center, they get so excited and make sure to tell me that they saw them.  I know many of the students spend a lot of time with their own grandparents, but being able to still share a similar connection once a month means so much to those seniors who may not get to visit their grandchildren as often.”

Pella was nominated for the Golden Apple award by Exeter resident Roma Rhodes.  Rhodes filled out the paperwork almost a year ago nominating Pella for the distinction.  “We’ve so enjoyed her visits with the first graders for several years. The interaction is very special to each of us, the kids as well as the seniors.”

According to Taryn Vanderford, “I choose five of the top nominations each month and then forward them to a committee made up of Doane representatives and two employees of 10/11 and they decide on the winner.”

When she learned about the award Pella was “honored, thankful, and definitely surprised.  I don't feel like I need to be honored for ‘doing my job.’  All I want as a teacher, is to make an impact on the students I get to teach, the girls I get to coach, and anyone else I come into contact with.  I guess, I don't feel like I need an award for that, but I am so beyond grateful for this award.  It truly means so much, knowing that you are making an impact on those around you.”

The only hard part about receiving the award was being interviewed for a spot which will air on Christmas night.  “Nerve-racking! The interview wasn't necessarily the nerve-wracking part, it's knowing ALL of these people will be watching it Christmas evening! Of course I wanted the interview to go perfectly, flawless, say the right words...I guess we will see in a few days! But in all seriousness, it was an honor to be interviewed and I just hope I can make Exeter-Milligan proud, because I am so proud to be able to call this wonderful community my home!”