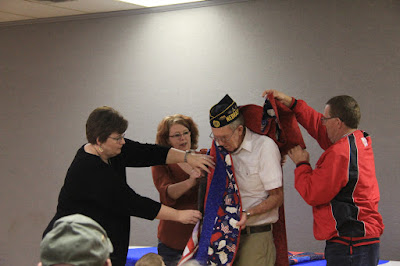 Richard Nicholas is wrapped in his quilt of valor by his children pictured from the left: Shari Michl, Hope Strate, Nicholas and Tim Nicholas. 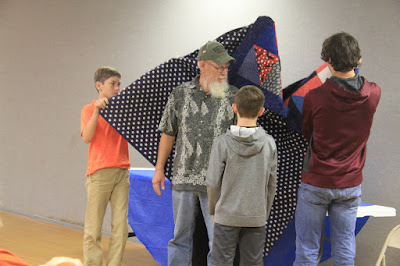 Terry Salyer was wrapped in his quilt of valor by his grandsons pictured from the left: Jayson Salyer, Salyer, Daylon Salyer and Jared Nunenkamp. 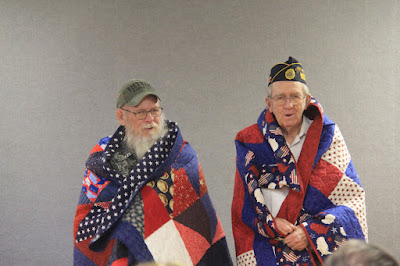 Two Vietnam veterans were honored with a Quilt of Valor during a ceremony held Sunday, November 17 at the Exeter American Legion Home. Terry Salyer and Richard Nicholas each received Quilts of Valor at the program.

Roberts created a non-profit foundation to guide the project.  Since 2003 over 237,000 quilts have been awarded to those who have served.

The quit given to Nicholas was made by Carol Kuska Leipzig from Salem, Wisc. And the quilt given to Salyer was made by Pat Becker, a member of the Exeter Auxiliary QOV committee.

Becker gave a brief history of each of the honorees military service before the quilts were presented.  Refreshments were served after the honorees were congratulated and saluted by veterans in attendance.

Nicholas served in the Air Force from 1954-1974
He  graduated from High School in 1953 in Laurel, Mont. The following January of 1954, he and four of his classmates decided to beat the military at their game and enlist before they were drafted.
The day was unforgettable as they travelled to Butte, Mont. to take the oath and the temperature was -36 degrees.  Nicholas was shipped out to San Antonio, Tex. For bootcamp and the first mail he received was his draft notice.
From there Nicholas studied Electronics/Computers in Denver for four months before shipping out to Lincoln to work on B47’s.  The bombers hadn’t arrived yet so he worked as a dispatcher in between.
In the 1950’s the computers were very large and required to men to lift them into the bombers.
It was while he was in Lincoln that a co-worker suggested an evening at the Plamor Ballroom and it was there that he met his future wife, Doris (and three of his fellow servicemen met and married three of her sisters all in the same year).
During their stay in Lincoln,  30 planes were ordered to go to a NATO exercise in London. Upon their return, one plane went down which carried half the men he worked with in Lincoln. The remains of that plane were never found. A memorial to honor those men was erected on the Lincoln base.
Leaving Lincoln Nicholas was sent to Tampa, Florida to work on the F-4 fighter aircraft. Doris also came and they established their home and started a family. Their next location was in Tuscan AZ where they were stationed for five years.
In 1966-67, Nicholas took a tour in Viet Nam. Following his tour, Nicholas reenlisted for four more years. At this time he was sent to Clark Air Force base in the Philippines to test the Squadron F-4s.
In 1971 found them transferred to Hollomon Air Force base in New Mexico to continue working on F-4’s. Nicholas was always prepared to be shipped out and while in New Mexico, he was awakened by bells ringing and lights flashing. As he left the house he grabbed the bags he kept packed by the door and was off to Thailand but was unable to tell anyone where he was for the next nine months.
Rations weren’t readily available as the pantry was stocked with canned wieners dated 1947.  The crew was able to purchase food from a Taiwanese lady who with her friends rode up with little grills attached to the handlebars on their bike.
Eventually their commander made arrangements for food and beverages to be delivered by the Navy.
Nicholas retired in 1974 bringing his family to their current home in Exeter.  During his service he became a tech sergeant and was awarded the Bronze Starfor meritorious service in Viet Nam as well as numerous other honors.

Terry Salyer served in the Army during the Viet Nam War
Salyer was drafted in 1966 and sent to Fort Benning, Georgia for eight weeks of basic training. His AIT training was held at Fort Sam Houston in Texas and medical training to become a medic.
While in medical training, Terry volunteered for a special project because the sergeant said “whoever volunteered will NOT go to Vietnam.” The Army exercised them every day, sometimes beyond the point of exhaustion and then would draw blood to see what the body secreted into the blood system to recover. They sold this information to the University of Florida. They found out that the body needed electrolytes and potassium to recover. From these results, they invented “Gatorade.” Salyer is still waiting for his royalty check.
Despite the Army’s promises Salyer was set to Vietnam anyway.  He was stationed at a medivac hospital in Qui Nohn, Vietnam. His very first day he was working on a soldier who was shot in the neck. Every time his heart would beat, blood would shoot up and then run down the back of Terry’s neck. They sent the wounded soldier to surgery and he survived. Salyer recalls thinking,“if this is happening on the first day, what was the rest of his tour going to be like?”
To this day Salyer carries the attitude of a soldier named Jim with him.  Jim had his leg blown off  just above the knee but he always kept a positive outlook throughout this terrible ordeal. Once he learned to use his prosthetic leg he could do anything Salyer could do.
After his tour of one year was completed he volunteered to stay another year. He had met an Army Nurse who would become his wife, Elaine Polack.  Together they worked on a surgical ward treating wounded soldiers. The only problem was that she was a first lieutenant and he was an E-5. The Army did not allow enlisted men to fraternize with an officer. Salyer stayed on in Vietnam for six months after Elaine’s tour was complete.  In total Salyer spent two years, 3 months and 20 days in Vietnam.
The Salyers were married in Exeter in 1969 and had three sons. When the Salyers are asked about their experiences in Vietnam, they usually respond,  “we saw the end results of war and it was not very pretty. It was often gruesome and hard to forget.”