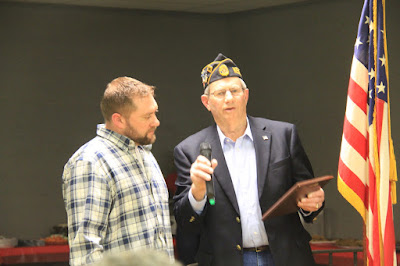 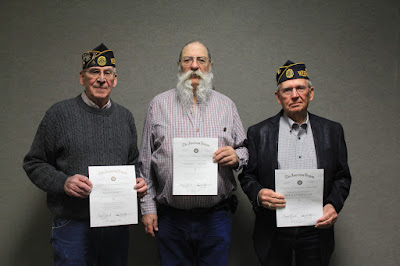 Exeter Legion Post 218 held their annual Legion birthday party on Monday, March 11th.  After the Legion, Auxiliary and Sons of the Legion each met separately they joined together for some special recognitions.

The Exeter post was formed in 1926 and purchased the current building in 1954.

First, Commander Alan Songster presented Mitch Schlegelmilch, Commander of Sons of the Legion, with a plaque from the state which recognized the 218 unit as achieving the highest percentage of membership.

Next, three Legion members were recognized for 50 years of membership and each spoke briefly on their service before they were presented with a certificate by Songster.

First was Norman Anton who spoke about how he was drafted and spent time in Korea as a mechanic.

Second was Ralph “Butch” Jansen who was also drafted into the Army and served as a medic for an armored division.

Third was Jack Underwood who had joined the reserves in 1964 and was called up with his unit in 1968.  He and his unit served in Vietnam for one year.

After the three were honored for their service and their membership a lunch was served.