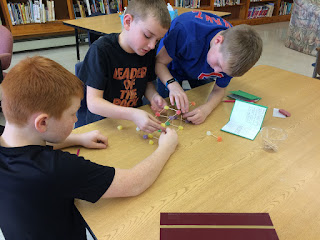 Carter, Aidan, and Landon working to build their structure.

During the month of February, the 4-6th grade have been working with coding for an hour each week. They have been logging into Code.cog and progressing through one of the units. The first hands on activity was to write a program for stacking cups. The students had to draw arrows on a card for stacking the cups a certain way and then their human robot had to read the card and do what it said without words from anyone. The students soon found “bugs” in their program and had to fix the “bugs”.

Students were given a journal to write code in as they went through the program. They found it to be very interesting and predictable after a while on what the code would be for certain moves. The last hands-on activity was to create a structure with given material that would hold a book for 10 seconds without collapsing. They worked in groups and soon fixed the “bugs” in their structure to get it to stand and support the book. They learned how to work through their frustration and used persistence to complete the project.

This introduction was all a segway to the “Coding Club” that has been started for 4-6th graders the final quarter of this school year. The Coding Club will meet most Thursday afternoons, after school. Students will work with a variety of software applications, participate in computer activities like computer programming and coding, and familiarize themselves with computer technology and with computer fundamentals. Dash and Dot, robots, will make an appearance sometime in April for the club to work and program the robots to go different places.
Posted by Leesa Bartu at 7:30 AM