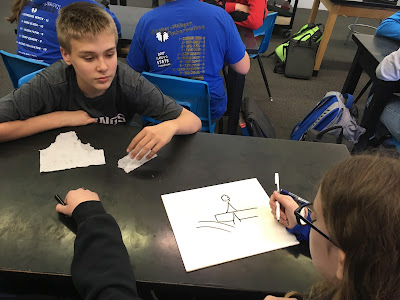 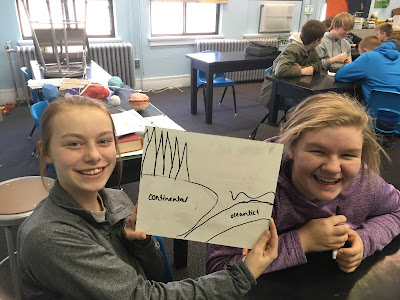 Madison Luzum and Kiah Songster. Boys in the background are Wesley Ronne, Braden Capek, Casey Underwood (back to camera) and Kole Svec 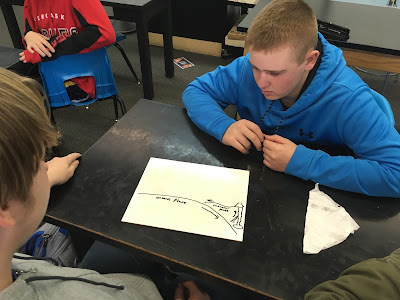 Casey Underwood and Braden Capek (back to camera)

Eighth grade earth science is not for the faint of heart. We dive deep into the mysteries of the earth. We are currently studying the Theory of Plate Tectonics. In the early to mid 20th century, the ideas of Continental Drift and Seafloor Spreading were combined to explain the occurrence of many of the geologic events and structures we see on a daily basis. The 8th grade students have been analyzing how those structures and events correspond to the physical plate boundaries that we see on earth today. We have used Google Earth to show that the frequency of earthquakes and volcanoes is concentrated in those plate boundary regions, but not all plate boundaries are the same. Some are Convergent (colliding), Divergent (moving apart), or Transform (sliding past each other), and these different types of boundaries produce different structures. For example, the Highest and Lowest places on earth are both produced by a convergent boundary. Mount Everest, part of the Himalayan Mountains, is the result of the Indian subcontinent plowing into Asia 50 million years ago, and The Mariana Trench, in the western Pacific Ocean, is the result of the pacific plate subducting under the asian plate.

Understanding how our earth formed 4.5 billion years ago, and that the same geologic processes have be shaping and reshaping the surface for Eons allows us to have some perspective on the scope and scale of the planet we live on. The earth is a big, complex place, but it can be understood. We can learn from the earth’s past and help us prepare for the future.

As part of this unit the students were required to write a paper summarizing an earthquake or volcanic event that occurred sometime in the past. I have included a few excerpts below.

“Sometimes, we lose everything. You might even lose yourself, but together we can start a chain reaction, like when you touch the water and wave after wave follows. Sometimes, you need to lose everything to see how much you truly have.”

“After the eruption many people thought that the area would never recover. They couldn’t have been more wrong. If you went back know the only sign that something happened would be the form of the Mountain, the occasional rusted out car, and the dead trees left from the burn down zone that are still standing.”
-Kole Svec, Mt. St. Helens 1980

“The U.S. Army's relief efforts during the 1906 earthquake and fire not only answered the needs of the immediate tragedy but also left a legacy for future domestic emergencies. Based on the army's experience in the 1906 disaster, clear and formal policies were developed regarding civil relief and the Army's relationship with the Red Cross was formally defined.”

Our students showed such compassion for the people that they were writing about and were so hopeful in their outlooks. It helps me be optimistic for our future knowing that the kids we are raising will become caring adults. I think that they will be excellent representatives of our school and community in the future.

During our review of this chapter, the students were tasked with drawing a subduction zone and labeling all of the features that go with it. Pictured are some of the students at various stages in their drawings.