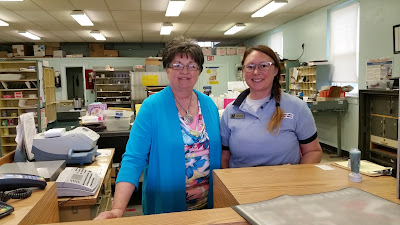 Kathy Stych (left) celebrated her retired from the Exeter Post Office on Friday while welcoming the new face in the office, Megan Oquist (right).

For thirty years Kathy Stych has braved the weather, the roads and the letters to get to a post office in Nebraska.  Friday, she officially retired as the sales, service and distribution associate in the Exeter Post Office.

Stych began her service in Cordova for ten years as a non-career employee of the Postal Service.  In 1998 she was commissioned as the postmaster in Cordova and remained there for 16 years before taking the head position in Exeter.

The USPS eliminated the postmaster position in smaller towns like Exeter and now call them sales, service and distribution associates.  The York post office oversees seven of the smaller towns including Exeter, Fairmont, McCool, Utica, Gresham, Waco and Benedict.

Stych, was excited about the change her life status.  She, along with her husband Bernie, plan to take lots of short trips to tour Nebraska and “enjoy my grandchildren and my kids.  We also hope to catch up with some old friends.”

While she hates to go, “It’s like leaving a family.  It has been an awesome ride.  It’s hard to believe I was so scared to come four years ago.  But, I sure won’t miss getting up at 4:15 every morning.”

She’ll still be getting up early to rejoin her walking partner in Cordova, just not that early.

Stych celebrated her 66 birthday along with her retirement on Friday.  She hosted an open house at the post office during the office hours on Friday and also helped introduce Exeter post office patrons to the new face in the window, Megan Oquist.

Oquist has been with the postal system for five years working in Clarks, Benedict and in York.  She is “looking forward to getting to know the community.”