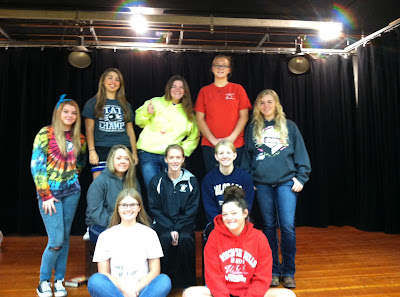 The FCCLA and One-Act of Exeter-Milligan Public Schools will be hosting a Dessert Luncheon on Sunday, November 8, 2015 for the public to a performance of  The Director by Clint Snyder directed by  Mrs. Valerie Barnhart.  Mrs. Mary Lou Vossler and the FCCLA will be providing the desserts for the day.   Please come to support the one-act cast and FCCLA in their efforts.

The one-act play cast are memorizing their lines and developing their characters for the upcoming conference and district competitions.  Many of the students accepted several roles in the play for this year.  As the director, I commend the students on their ability to
adjust to the different characters.  The play pokes fun at the theater department’s attempt at combining three plays - A Midsummer Night’s Dream, A Streetcar Named Desire and an experimental freeform body piece - into one production as a result of budget cuts.  The actors are asked to cope with an egotistical director, read lines from greasy napkins, and suffer through the director’s warped interpretation of the play.  It promises to have the audience laughing from beginning to end.
Exeter-Milligan will be the final school to perform at the conference meet at Cross County Schools on November 18, 2015 at approximately 5:30 P.M.  Districts will be at Johnson-Brock Public Schools on December 2, 2015.  We welcome any of the community members to come and watch the performances those days.