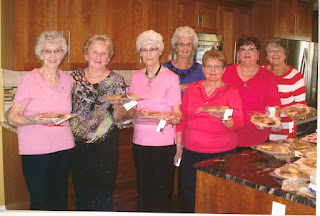 Above - The GFWC Woman’s Club in Exeter celebrated “Make a Difference Day” by making cookies and delivering them.  Pictured are club members from the left Reba Toothman, Agnes Loukota, Suzanne Johnson, Judy Dinneen, Kathy Due, Sharon Mueller, and Sue DeJonge.
Below - Samantha Horne reported to the Exeter GFWC Woman’s Club about her experiences at the Sophomore Pilgrimage. 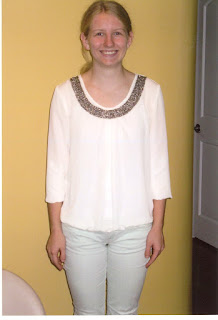 The Exeter GFWC Woman's Club met on October 20, 2015 at the home of Agnes Loukota.
Co-president, Karen Chapman, welcomed Exeter-Milligan student, Samantha Horne who attended
the 31st annual Sophomore Pilgrimage at the State Capitol on April 8, 2015.  One of the
distinguished speakers was Governor Pete Ricketts.  She especially enjoyed speaking with several
of the Legislative pages.  The pages are usually students from UNL or UNK.  She also observed
the Unicameral in session, and stated the discussion of bills and the voting process was somewhat
different as all senators did not have to vote and there was much talking during the entire process.
Samantha thanked our club for sponsoring her.

The business meeting was called to order by Karen.  The Pledge of Allegiance and Club Collect
were recited.  Secretary, Sue DeJonge, read the minutes of the previous meeting.  They were
approved as read.  Treasurer, Sharon Mueller, gave the treasurer's report, which was filed for audit.
A silent roll call was taken.

Agnes read a thank you letter from Operation Smile for the arm bands made by our club, and Sue
received a thank you from Orphan Grain Train for the pillowcase dresses sent to them.

Co-president Kathy Due, Reba Toothman, and Karen reported on the Dist IV Convention held in
Fairmont on October 1.  A very interesting program was presented on human trafficking.  The
speakers were Donald Kleine from the Attorney General's office, along with FBI Agent Sara
Stanley, and Victim Witness Specialist Kimberly Roewert.

A report was given on our pie sales at the Exeter Holiday Avenue Sampler.  Kathy reported that we
will no longer collect plastic lids, but will continue with Our Family bar codes and Box Tops for
Education.  Greeting card orders were turned in to Sharon.

Under new business a motion was passed to give a memorial to Faith Lutheran Church in Lincoln
in remembrance of Jerry and Karen Chapman's son, Terry, who passed away earlier this year.

The Young Woman's Quiz Bowl will be Wednesday, October 21 at the Seward Civic Center.  Girls
attending will be Ashley Benorden, Samantha Horne, Hannah Horne, Karoline Knudsen, Josie
Kresak and Kate Jansky.  The writing workshop for women and young women will be held at the
Seward Civic Center on November 4, 2015.

Our next meeting will be Tuesday, November 17, 2015 at the UCC fellowship hall.  Sue DeJonge
will present a program on the BOW weekend she attended at Halsey National Forest.  Hostesses
are Marsha Jorgensen and Barb Votipka.

Karen thanked Agnes for volunteering her home for the meeting.  There being no further business,
the meeting was adjourned.  Refreshments were served by Karen and Reba, followed by members
assembling plates of cookies to deliver to veterans and seniors in Exeter, Fairmont, and Cordova
for “Make A Difference Day.”