Exeter-Milligan didn't take long to put up points Wednesday night in a windy playoff match at home in Milligan.  The Kennesaw Blue Devils traveled to Milligan confident after their first round defeat of Giltner 81-6.  The Blue Devils must have been shellshocked when the Timberwolves took a 28-8 lead by half.  By the end of the third quarter the T-wolves were up 34-8.  The Blue Devils finally made some progress passing the ball when #6 Tyson Burr caught a Schnitzler pass with 8:41 left in the fourth quarter. Kennesaw completed the 2 point conversion (34-16) but the Timberwolves turned right around and on the first down Maxson runs into the endzone 59 yards for another 6.  Zeleny pulled a QB keeper and tacked on two more points. Kennesaw had the ball again and on the second down the ball was scooped from Schnitzler's on the 3 yard line by Kirby Soukup and Jack Dinneen.  Joey Bartu carried the ball in for a touchdown but couldn't get the conversion in.  Kennesaw tacked on another touchdown with the reserves for both teams in the game making it 48-24 with 3:45 on the clock.  The Timberwolves went three and out and in their final possession the Blue Devils scored again making the final 48-32.  The Timberwolves will meet Wynot in Milligan on Tuesday. 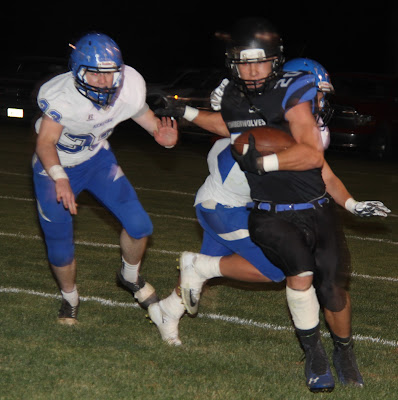 Kennesaw got tired of seeing the picture above and below.  Above - Sean Maxson carrying the ball for another t-down and below - their star quarterback Preston Schnitzler on the bottom of a pile of Timberwolves. 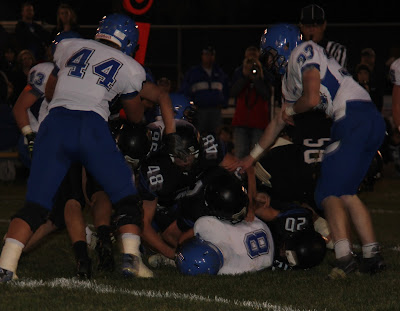 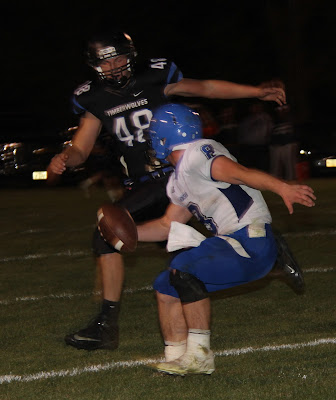 Kennesaw quarterback #8 Preston Schnitzler knows he isn't going anywhere with Cameron White in front of him. 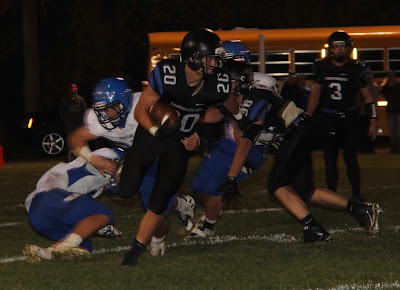 Sean Maxson breaks loose and heads down the line for a touchdown. 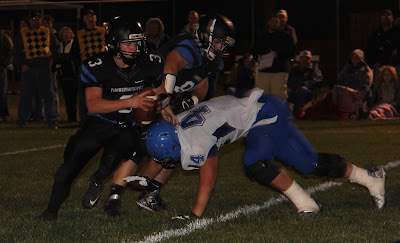 Zeleny decides to keep the ball and makes some yards. 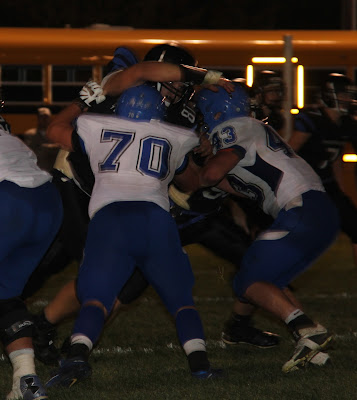 Spencer goes up over the top of the Blue Devils. 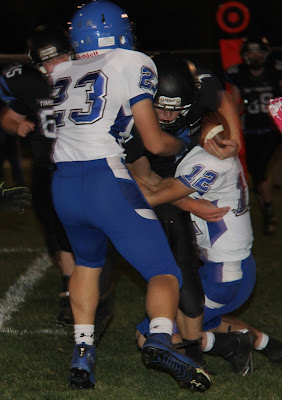 #1 Colton Bossaller tries to make some headway.
Posted by Leesa Bartu at 10:28 PM