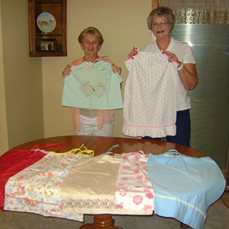 Unwanted pillowcases are getting new lives as children’s dresses, thanks to the efforts of GWFC Exeter Woman’s Club members Agnes Loukota, Bonnie Cudaback and Sue DeJonge.

DeJonge brought Orphan Grain Train, a Christian nonprofit organization, to her fellow club members’ attention after receiving a flyer in the mail. Recognizing Orphan Grain Train’s need for children’s clothing, the idea to construct children’s dresses from pillowcases came to fruition. The women have been creating the pillowcase frocks for about 6 months. To date, Loukota, Cudaback and DeJonge have contributed over 150 dresses to Orphan Grain Train.