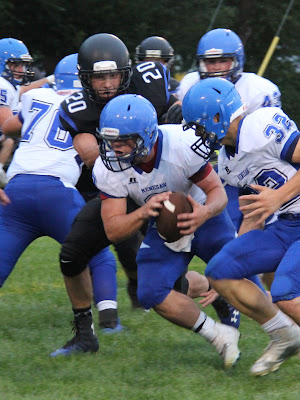 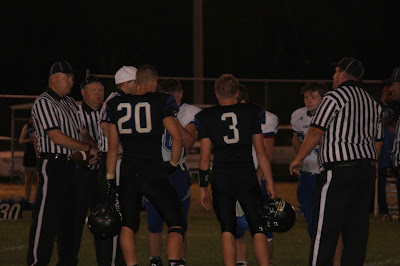 Maxson #20 and Quarterback #3 Sam Zeleny at the coin toss for overtime. 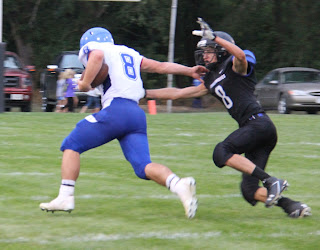 Timberwolf #8 Eric Olsen goes after Kennesaw's #8 Preston Schnitzler.  Schnitzler was injured for a portion of the game and Olsen went on to catch a beautifully thrown pass by Zeleny for a touchdown. 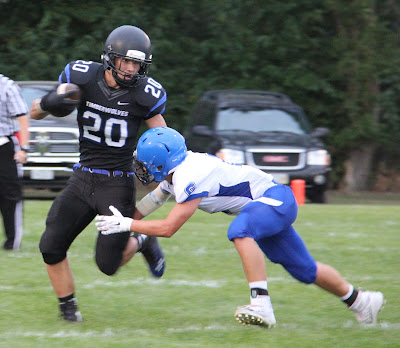 above and below -Exeter-Milligan’s Sean Maxson heads downfield with the ball before Kennesaw’s #6 Tyson Burr tackles him. 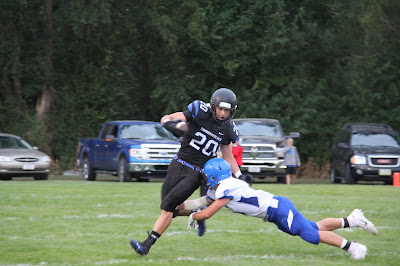 The Timberwolves took on Kennesaw at home on Friday night.  The Bluedevils had star quarterback Preston Schnitzler who has hit the record books for his quarterback keepers.  Cocky from the start, the Kennesaw team scored on their first possession with Schnitzler running in the kick off return for a score.  The score went back and forth for a while with the Timberwolves leading at half 34-26.  In the last minute the Timberwolves tied up the score and headed into overtime.  The Bluedevils could not get anything done in their four downs and the Timberwolves Sam Zeleny kept the ball on the second down and took it in for a touchdown.  Timberwolves win 46-40 in another heart-stopping, blood thumping Exeter-Milligan kind of win.
Posted by Leesa Bartu at 11:43 PM