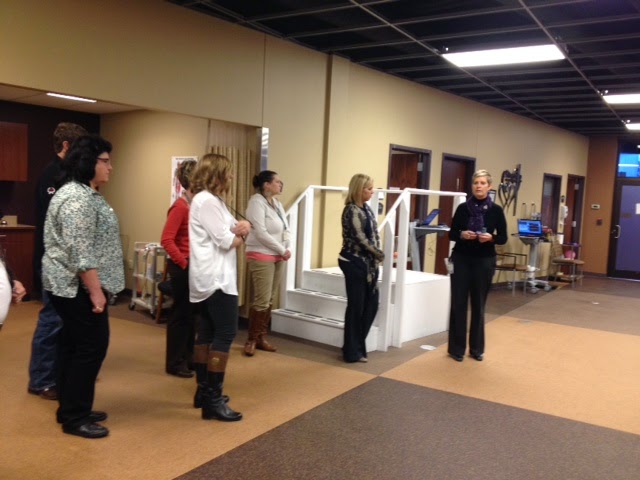 Class members listening to Lisa Hopken, Director of Nursing talking about the Physical Therapy Dept of the Fillmore County Hospital.

Paul Utemark gave an overview of the Fillmore County Hospital. Lisa Hopken, Director of Nursing, took the group on a tour of the hospital as she told about many of the services offered and have been added since the new hospital opened in 2012.  The group also had a tour of the attached Medical Clinic by Karen Leach.
Using the conference room of the hospital additional speakers came in and gave the class information about other health and/or human services in the County.  They included Rod Renken-Geneva Rescue Unit, Rick Nation, Lisa Epp, Brenda Sherwin, and Randy Williams- Blue Valley Community Action (BVCA), Jill Schmidt-Good Beginnings, Gerry Merck-Senior Behavioral Health, and Pastor Jeff Jensen-Ministerial Association.
The morning break was sponsored by Edward Jones.
After lunch, sponsored by the hospital, the group traveled to Fairview Manor in Fairmont where Tammy Scheil and Jan O’Brien told about the concept of Eden Care used at the home and gave the group a tour of the facility.
Fillmore County Offices-East is where the leadership group heard about Fillmore County Senior Services from Brenda Motis and Rhonda Stokebrand.  Other speakers at FCO-East were Jeannie Zink-Wythers, a licensed independent mental health practitioner and licensed alcohol drug counselor and Angie Howell with Easter Seals.
Heritage Crossings was the next visit by the class. Cherie Domeier directed the group through the facility and explained about the services at Heritage Crossings and their continuum of care with skilled nursing, assisted living, and soon to be completed cottages for independent living.  Heritage Crossings had cookies, coffee, and tea for the class.
The final stops of the day were at the dentist office where Dr. James Trexel began his practice several months ago. Next was Kleinschmidt Physical Therapy where he shared information about the amenities offered in his recently opened business.
The February session of the Odegeo. . . Leadership for Fillmore County will take the class to Lincoln to learn about state government and the unicameral system.
Persons interested in learning more about Odegeo…Leadership for Fillmore County may contact the Fillmore County Development Corporation at 759-4910 or email lentfer.fcdc@genevamail.com or go to www.fillmorecountydevelopment.org.