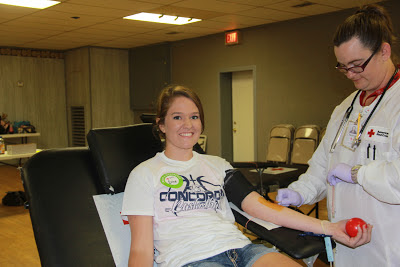 First time donor Erica Yound is all smiles as she is prepped to give blood.

The American Red Cross Bloodmobile was held in Exeter on Friday, June 28th.


This month the goal for Exeter was 37 units and there were two important difference makers in helping the group collect 42 pints.  Primarily it was the eight individuals who gave double red units counting for 16 pints.  Second of all it was the two first time donors, Exeter-Milligan incoming seniors Erica Yound and Meredith Emshoff.

Dave Bristol and Meg Becker were presented with four gallon pins by Mousel.  Coordinator Barb Jansen was so thankful for so many who donated, “Thank you to everyone who gave blood and helped with the bloodmobile.  We always need donations of blood but this time of year we are especially in need.”

It takes lots of volunteers to help the bloodmobile happen including unloaders, loaders, escorts, greeters and the UCC church ladies group who made and served the lunch.  Donors also were served some of the cake that was presented to Hall in honor of her years of service to the American Red Cross.

The next area Bloodmobile will be in Fairmont on August 23rd.