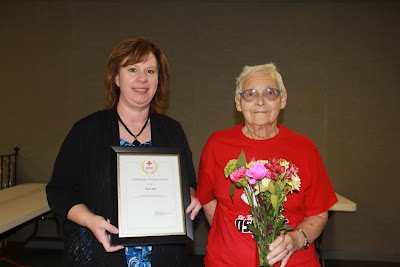 Stephanie Mousel, Donor Recruitment Representative for the American Red Cross, holds that certificate that was presented to Doris Hall at the Exeter Bloodmobile for the many years that Doris has coordinated the event.  Hall was also honored with a cake and presented with flowers.


During the American Red Cross Bloodmobile in Exeter on Friday, June 28th Doris Hall was recognized as she retired from close to 25 years of coordinating the event.

Donor Recruitment Representative Stephanie Mousel was on hand to honor  Hall and presented her with a certificate of achievement which noted that Hall has helped collected over 735 units of blood with the American Red Cross.  Both knew that Hall had coordinate the drive to collect more than the certificate listed but some of the records weren’t available.

Hall has passed her duties on to Barb Jansen who now coordinates along with the continued assistance of Ruth Ekeler.  Hall has enjoyed coordinating the blood drive all these years “It’s the satisfaction of knowing I’m helping people.  After Leonard died (her husband) I started donating blood and that became coordinating and I’ve stayed with it after all these years.  I wasn’t looking for a job a job but it found me.  It does feel good not be in charge anymore.”

Hall has always found the community support for the event to be outstanding, “We always have a great turnout and are now even booking appointments for the next bloodmobile in Fairmont.”

The next area Bloodmobile will be in Fairmont on August 23rd. 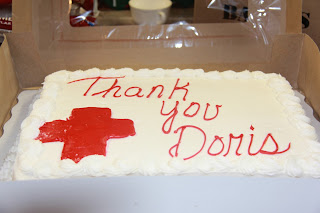