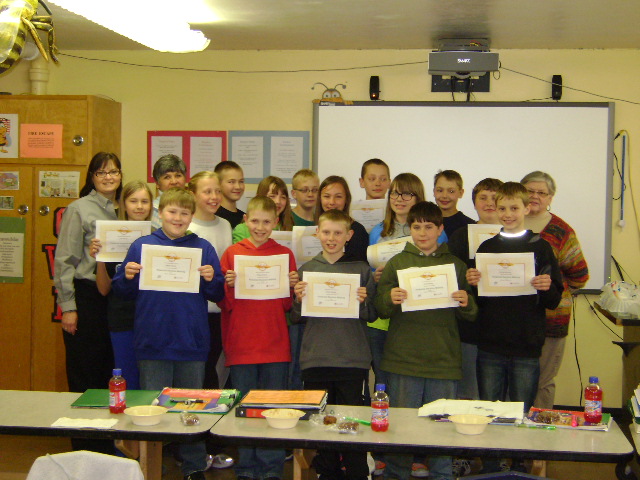 Exeter-Milligan sixth graders were the first students in the district to participate in the Ever-Fi Financial Scholars program.

Sponsored jointly by Generations Bank in Exeter and Farmers and Merchants Bank in Milligan, the completely online program uses the latest in new media technologies to educate students about some difficult financial concepts.

Sixth grade teacher Mrs. Julia Polak felt the students “liked” the program.  “Some of it was a refresher of the information that Sharla Dinneen shares with the elementary students on "Teach Children to Save" day each spring.  But other information was new to them about credit cards and checking and how the United States economic system works.”

Dinneen represented Generations Bank in the school and Deb Filipi represented Farmers and Merchants Bank in Milligan.  Both “believe that financial education is essential in developing a good savings/spending habit, which is vital for a healthy financial future.”

Polak was very appreciative of the banks sponsorship of the program, “It is a three-year commitment on the part of both the banks and the school, so for the foreseeable future, the E-M students will have one more tool to become successful adults.”

Dinneen and Filipi were “pleased that the staff at the Exeter-Milligan school found value in these programs and have included them in their curriculum.”

The program, a graduation requirement in the Omaha Public School District, helps students learn about becoming financially responsible.  The program that was used in the Exeter-Milligan sixth grade class is designed for middle schoolers but there is also a high school program that the district is using as part of the Family Consumer Science classes. All 9th graders are using the program in their Exploratory FCS class as well as students enrolled in FCS II .

Mary Lou Vossler who teaches the Family Consumer Science classes at Exeter-Milligan felt the program “gives them a baseline of knowledge that will be used in their adult life.  I also think it makes them stop and think about their own financial skills and practices, and hopefully generates conversations within their own families about the various topics that they are introduced to.”

The Everfi curriculum is completed in modules, topics include savings, banking, payment, interest rates & loans, credit score, financing higher education, renting vs. owning, taxes & insurance, consumer fraud and investing. Along with the concepts, students gain an understanding for the vocabulary that is associated with each concept and information that will be used in their adult lives.

Vossler thought that “the topics can be very challenging and sometimes the younger students do not believe that some of the content is relevant because they are not wage earners and they may not have a savings/checking account. “

In working with the program and her students, Vossler found that “it gives them a baseline of understanding before they become the consumer, investor, salary earner and tenant. It challenges them in a different way and it makes them accountable for their daily learning.”

The program is entirely done online and students must have a 70% or above to move to the next level in the course. Students could move at their own pace and are able to work on it from their school issued laptops at home.

Graduation from the program was celebrated this year with an ice cream sundae party for the sixth graders after they were presented certificates. A celebration will be held at the high school when the coursework is completed.