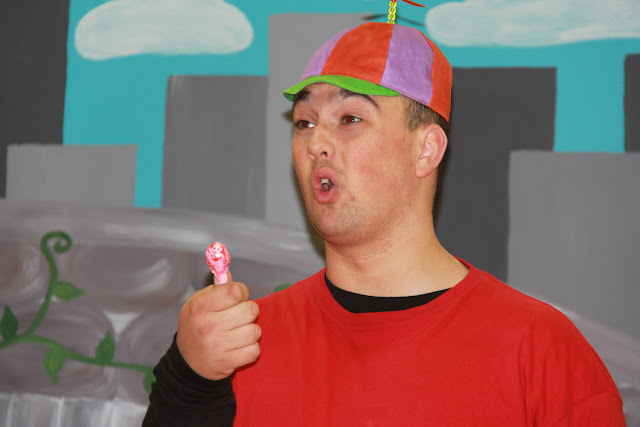 
Exeter-Milligan 2011 graduate Jameson Trauger has definitely made his presence known in the York College Theatre Department.

Just a sophomore this year, Trauger has already participated in four York College productions along with a production at the Yorkshire playhouse.

One of his gigs, the Children’s Theatre brought him back to familiar territory this week for a performance at the Exeter-Milligan gym on Tuesday, April 30th.

His favorite character at Exeter-Milligan was “the Professor.  I got to make him an eccentric guy.  I also got to do crazy walking things I picked up from “Monty Python.”

The history education major at York College is thinking about doing a minor in theatre along with a coaching endorsement before heading out to look for a job teaching at the high school level.

Last year Trauger participated in three of the four York College shows including, “Send Me No Flowers,” the One Act plays with emerging directors, “Dinner with the McGuffins,” and the spring drama, “Anatomy of Gray.”

This year Trauger has performed in “Inspector General,” the One Act, “Check Please, Take Two,” the drama, “Wit,” and the Children’s Theatre performance of “Stuart Little.”  He is also in the current Yorkshire Playhouse production of “Bus Stop.”

Trauger finds the Children’s theatre production a challenge, “Children’s theatre requires quick changes, scrambling to remember everything in addition to loading and unloading the set on Tuesday and Thursday morning.  Travelling around makes it a little stressful, too.”

He has also enjoyed his time at York College, “It’s nice to be close enough to home to get laundry done but far enough away to do my own thing.  Mostly I have enjoyed that York College is a pretty small campus made up of very diverse people from all walks of life and all over the place.  Everybody is really close and they care about each other.  When going through tough times, everyone rallies around.”

In the Children’s Theatre production Trauger has also been joined by other local students including Patrick Clark and John Baker from York and Bethany Miller from Milford.