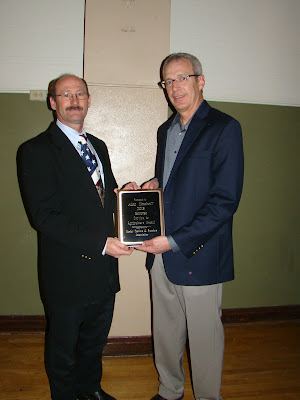 Alan Emshoff, President of Generations Bank in Exeter, was recently award the Service to Agricultural Award at the Exeter Feeders and Breeders Banquet in Milligan on March 30th.  He is pictured with Henry Rolla Jr. , Vice President of the Exeter Feeders and Breeders (left).  Alan grew up on a farm in Avoca, NE, about 30 miles east of Lincoln in Otoe County. He was active in agriculture with his father and grandfather at an early age, helping with the grain and cattle operations.  4-H and FFA were a big part of his youth, exhibiting many champion heifers and earning his State Farmer award in 1978.  Alan came to Exeter in 1997 to work with First National Bank in Exeter using his experience in the bank industry as well as his family farming background.  He and his wife Amy live in Exeter and have three daughters Taylor, Madelyn and Meredith.
Posted by Leesa Bartu at 7:30 AM