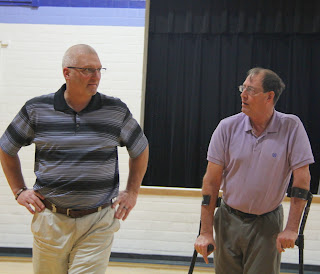 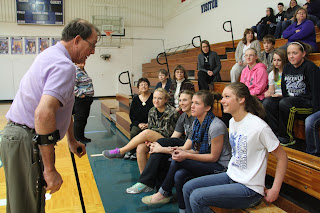 Exeter-Milligan students heard an inspiring speech on the last Monday in March.  Jerry Traylor, a McCook native, shared the message of positive thinking that has made the difference in his life.

Born with cerebral palsy, Traylor endured 14 operations before he was 14 years old.  Despite wearing braces and crutches he shared a picture where he is still smiling as a young child, “I knew I was blessed because I could do things in my imperfections and I knew I was loved.”

His goal was to help the students see their strengths and use them.  “Don’t worry about what you lack, use what you’ve got,” was a big part of Traylor’s message.

Through the years, Traylor has refused to let his physical challenges limit him.  He once decided he could do a 2 mile run on crutches, and even though it took him longer than everyone else he decided to go further and try a marathon.

That marathon, according to Traylor, “Was the dumbest thing I ever did because I wasn’t prepared,” but he went on to do more, learning from his mistakes.

He encouraged the students to not listen to negative people and “to make plans rather than excuses. Become a participant rather than an observer.”

Not only did Traylor finish multiple marathons but he learned to not put a limit on his potential; he went on to climb Pike’s Peak.  About that experience he told the crowd, “If you know you can’t do something then you don’t know.  So many people choose to take the easy way out.”

He encouraged the students to take care of the physical bodies they were given and to make good choices about how they treat their bodies noting, “I was given Cerebral Palsy at birth. It kind of messes with me when people don’t care about their life.”

Traylor emphasized that choice in friendship is one of the most important areas of the students’ lives, “Pick people who have empowered you, the type who encourage you.  Walk the other way if people are telling you what you can’t do. Find people who believe in you when you don’t believe in yourself.  Popularity is not nearly as important as purpose.”

Traylor talked about his friendships when he talked about his next accomplishment, jogging (on crutches) from the Golden Gate bridge to the Brooklyn bridge.  He jogged for 18 miles a day with his friends supporting his effort.  Instead of telling him he couldn’t do it, “My friends asked how they could help me.”

Traylor used his disability as his platform, “I didn’t think these crutches and crooked legs would help,” but he found at several of the stops on his jog across America, it did make a difference.

In one town, they redid the biking trail, enlarging it to hold a wheelchair.  To Traylor, that was one of the highlights of the seven and a half month adventure.

Traylor has written a book titled “Living Care Fully” about caring about people and is currently writing a second book titled “Live Aim Fully.”  He lives in Arizona and gives inspirational talks to students and professionals all over the nation.  Once every few years he travels to Nebraska and makes a special stop in Exeter to visit family (Cousin Roma Rhodes) and share his message with Exeter-Milligan students. 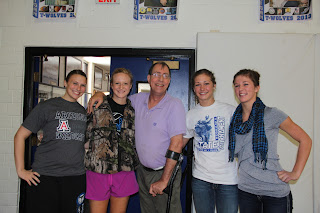