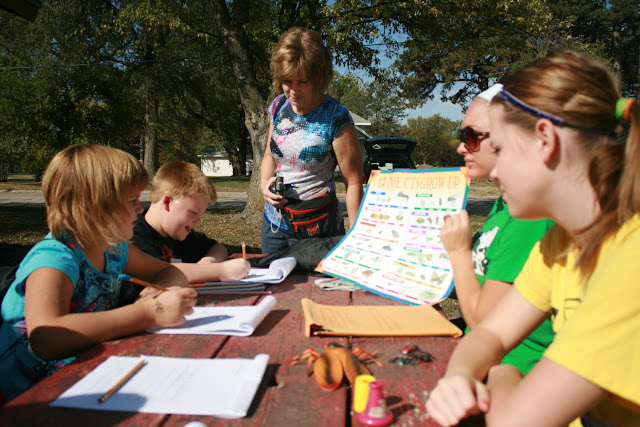 Learning about insects was the theme for this station at Outdoor Education Day.  Clockwise from the left are Olivea Swanson, Chase Vnoucek, second grade teacher Marla Weber, Toni Bossaler and Kylie Briske. 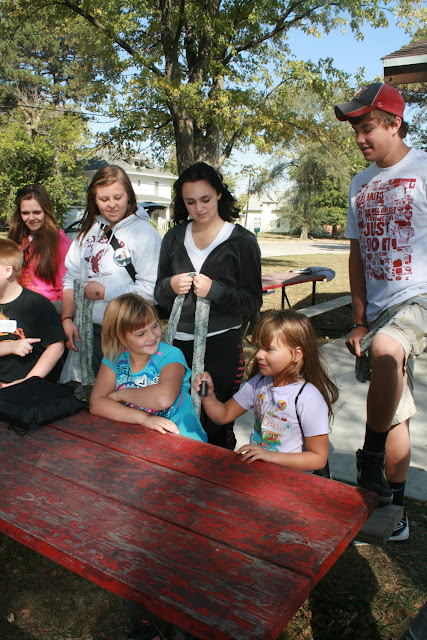 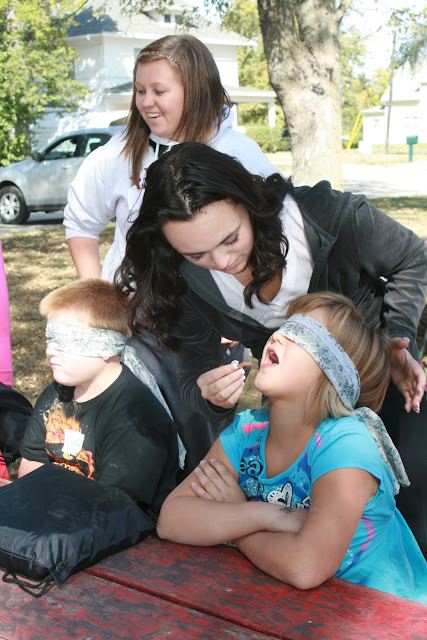 Now blindfolded at the sensory station the second graders try something that happens to be chocolate.  Pictured clockwise from the left are Chase Vnoucek, Logan Zeleny, Deidre Stevens and Olivea Swanson.

A beautiful late summer day was the setting for the second graders at Exeter Milligan to learn about the outdoors from Exeter-Milligan high school students at the annual Outdoor Education Day.

This yearly event allows for the students in Lorie Sliefert’s Biology II class to spend several weeks choosing and planning different stations to present to Marla Weber’s second graders class during the all day event held at Gilbert’s Park in Exeter. Weber started the concepts for this project while in college and has held the event yearly since then.

Since the second grade class is very small, they could move through the stations more quickly but it also gave the Biology students time to teach more stations. Sliefert noted that, “They all worked hard in class to make sure that they were ready for their session.  I know that some of them were nervous but afterward they said that it was easier than they thought it would be.  They were amazed at how much the second graders already knew.”

Much of the learning goes both ways, as Sliefert commented that the high school students “need to develop leadership skills and be positive role models for the younger students.”

Both teachers commented that the new station, Oceans was a big hit.  The second graders created an “ocean” in a bottle with water, oil and food coloring.  Also new this year was “Eat the Earth,” a station using an apple to illustrate how much of the earth surface is available as farm ground.

Another fun activity for both classes was  a geocaching scavenger hunt.  Brandy VanDeWalle, the Fillmore County Extension agent, demonstrated the use of hand-held GPS units (Global Positioning System) to the high school students.  The biology students then plotted coordinates for use during the planned scavenger hunt and also used the units to help measure shadows more accurately.

During the day the students learned about the growth rings on a tree and then made the comparison to their own life, making a drawing of the different stages of growth in their own lives.  They found animal tracks and made plaster castings to take home, along with making rainsticks when they learn about the weather.
Posted by Leesa Bartu at 7:30 AM