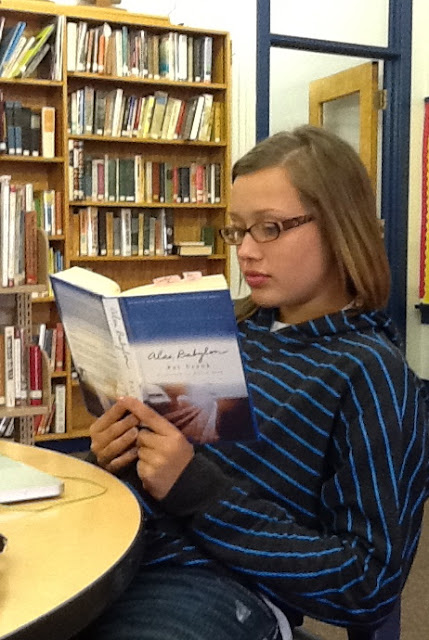 While students at Exeter-Milligan School are reading good stories, they are also discovering that poetry is often disguised as prose. Those seemingly endless rows of sentences, and pages of paragraphs, are bursting with poems just waiting to be found.  Found Poems, in fact, are poems created from words and phrases taken from text.

While reading Alas Babylon, by Pat Frank, American Literature students discovered that the description of the setting (Fort Repose, FL) could also be described poetically.

Freshmen English students are currently studying the elements of poetry, and experimented with rhyme schemes by writing parallel poems.  Parallel poems are written in the same style, and sometimes the same theme, as other poems that interest us.  The poem they paralleled is “Sick”  by Shel Silverstein.

Sick
By Jack Dinneen & Janey Due

“I cannot go to school today,”
Said little Peggy Ann McKay.
“I am too tired to get up.
I think I’m going to throw up.
My skin is very itchy;
My eye is really twitchy.
My joints won’t even bend.
I think it may be the end.
There’s a clot in my bloodstream;
This is very extreme.
I have a very fast heartbeat,
And I have very cold feet.
I just got out of the shower,
But I still don’t have any power.

WAIT! Today is Saturday.
I feel well enough to play!”

All students in Mrs. Wahl’s English classes are reading books, and journaling about the elements of fiction. This quarter, they are describing the character traits of the protagonist in a biographical poem. Maybe you’ve read one of these books, and will recognize these characters.

I am Berry
Son of Mumma
Who needs help
Who loves his family
Who sees darkness around
Who hates deceivers
Who fears losing the trust of the Mallard
Who dreams of having a better life.
Who has found poems of depression and sadness
Resident of the planet Earth.

From Black Juice by Margo Lanagan

I am Ty
Brother of Thane
Who needs Thane to get better
Who loves his life, living with his brother
Who sees Thane playing on Jet’s Field
Who hates how the FBI watches
Who fears that Thane won’t be able to play again
Who dreams of making the Raptor’s football team
Who has found poems of laughter
Resident of New York
Lewis

From Deep Zone by Tim Green