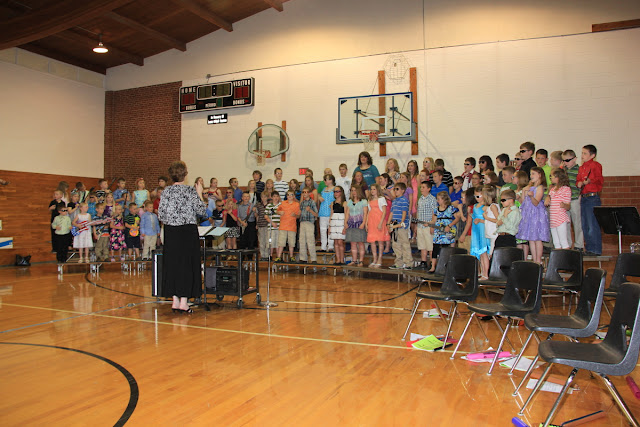 My Favorite Things was the theme for the Exeter-Milligan Spring Concert in Milligan on Tuesday evening.
A packed house stood and sang with the sixth grade band who opened the show with The Star Spangled Banner.  They also performed Rock It To Me.  The fifth grade bad did an outstanding job performing Name Those Tunes  and  Let’s Go Band!
The fourth graders performed Pedal to the Metal  on their recorders and the third graders played Whacky Fajita on their boomwhackers.
The audience was also treated to a performance by the seven students who represented Exeter-Milligan at the Sing Around Nebraska festival and sang Shout for Joy.
The theme for the evening was My Favorite Things and the students had chosen from the music they had learned this year performing their favorites.  The Kindergarten through sixth graders performed the song My Favorite Things from the musical Sound of Music to set the tone for their choir offerings.
The Kindergarten through second grades chose to perform Colors, Apples and Bananas, I’ve a Pair of Fishes and Scat Song. Third and fourth performed the perennial favorite Take Me Hone, Country Roads and Trail to Mexico with special instrument performance by MicKael Halverstadt, Caitlin Murphy and Jacy Schlueter.  The students also performed Rockin’ Robin.
The fifth and sixth graders performed I Believe I Can Fly and The Lion Sleeps Tonight finishing with You Sing For Me.
To close the concert the entire group sang their own version of E-M’s Favorite Things which was arranged by the sixth grade class to reflect each different groups special memories.  Art created by each class to reflect their favorite things was displayed on the back wall of the gymnasium.
Posted by Leesa Bartu at 8:15 AM