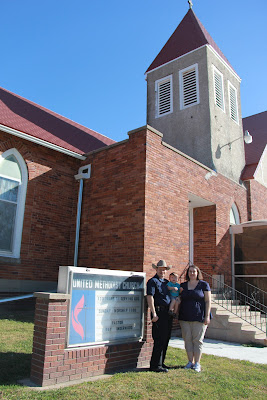 The Exeter and McCool Junction United Methodist Churches have a new pastor in residence at the Exeter parsonage.Pastor Ray Underwood, his wife Sharon and their young son Derrik have moved to the parsonage in Exeter.

Underwood grew up as the son of a minister and never imagined that he would find himself in the same vocation growing up. As a child he was very involved in church, “My first year in college I went to church about a dozen times when my parents were there to visit,” explained Underwood.

At Centre College in Danville, KY, Underwood was a German Language major and spent some time overseas in their campus in France. He experienced some difficulties there and upon his return “started to seriously reevaluate what I believed,” according to Underwood.

It was during a student led prayer group and Bible study that Underwood found his way, “I got honest with myself and with God and realized I could continue to live my life my own way or choose to let God lead me.”
He didn’t respond positively to God’s call to the ministry immediately. It took a week to accept the feelings that were directing him toward following his father’s footsteps. He headed to Louisville Presbyterian Theological Seminary as he grew up a Presbyterian, however the school also trains Methodist pastors.
After he received his M.Div in 2000 there wasn’t a full time ministry position available so he joined the Army for “reliable income, and good leadership skills.” Underwood was deployed on active duty from 2001-2005 stationed at Fort Bragg, NC from February 2002-May 2005 and served in Kuwait traveling north to Iraq when Sadaam was removed from power from 2003-2004.

After he was released from active duty he felt God calling him to Nebraska and enlisted in the National Guard and found work at the Tecumseh State Correctional Institution in 2006. He met his wife Sharon online before his second deployment and neither was looking for a relationship. They became friends, and during his deployment corresponded regularly.

Sharon moved to Omaha from Baltimore, MD and they started to date, marrying in 2008.  Sharon recalled “On our way home from our honeymoon we got a call that Ray’s unit was going to be mobilized.”

As part of the 192nd Military Police Ray spent about a month responding to Hurricanes Gustave and Ike before returning to Nebraska for more training and then heading to Baghdad. This deployment, Ray worked a desk in the International zone with law enforcement, but his primary responsibility was working with licensing vehicles in the area. He enjoyed “working with the different cultures in a way that was very positive.”

When his tour was done he returned to Syracuse and his job at the correction facility. Prior to deployment, Ray and Sharon searched for a church home and found the Syracuse United Methodist Church where they became involved in several ministries.

Their minister was actively recruiting Ray for a ministry position especially after he learned of Ray’s education. However, there were no ministry openings in that district. Ray began to look at the possibility of becoming a chaplain in the military until he heard about the opening in Exeter and McCool.

After interviews and visits Ray started the job on August 1st commuting until the parsonage was ready for his family to move in to. So far the family is enjoying the community and the churches. They are expecting another child in the spring. They hope to spend some time getting to know the community and seeing its needs. “We hope to build on the traditions that are already here,” said Sharon.

Ray wants to focus on “learning what the felt needs of the community are. Until you meet the basic needs of people you won’t be able to address the spiritual needs of people.”

He faces several challenges with the change in venue; coming from the Department of Corrections and military background to working full time in the church will be an adjustment. The ministry position is a three quarter time position, which works for Ray as he is still a guard member and spends one weekend a month at drills.
The biggest challenge as Ray sees it is, “Two different communities, two different backgrounds, two different histories, two different strengths and challenges and learning the differences and working with the two churches.”

His goal in working with both congregations is to help them grow spiritually, “If they don’t have a healthy spiritual relationship with God they will not experience God’s blessings as richly as they could. A church is never going to grow and sustain growth if the pastor is doing all the work. The church has to do outreach as the pastor won’t be there forever.”