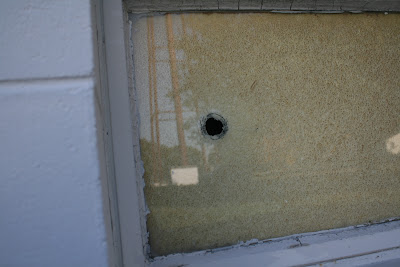 From the exterior of the Exeter Fire Hall, the hole is visible in a window that has been covered up on the inside. 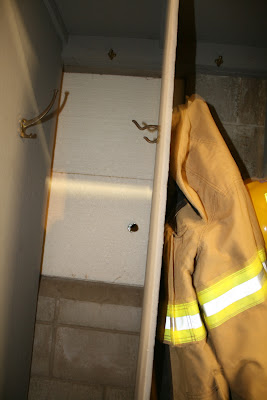 From the inside of the Exeter fire hall the hold caused by a bullet is visible in the locker area. 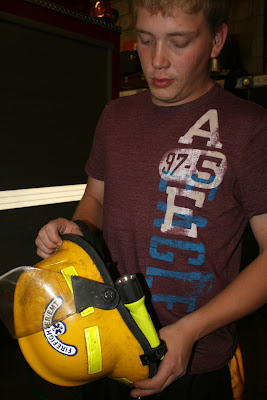 Jacob Miller holds his fire helmet showing where the bullet richocheted preventing damage to the nearby fire truck. 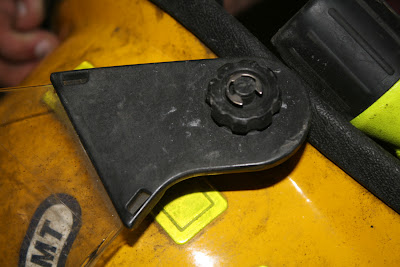 Scuff marks are visible on Miller's helmet where the bullet impacted. 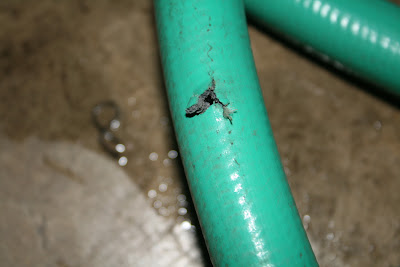 A bullet ripped through the garden hose the department uses to wash the fire trucks. 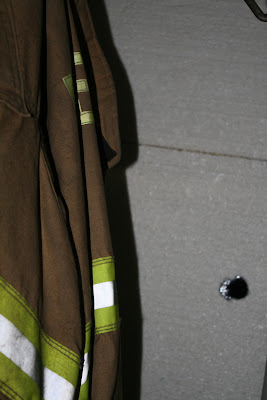 With Miller's fire coat back in the locker, the hole is visible.
Monday night during a Junior Fire Patrol meeting, members of the Exeter Fire Department discovered damage caused by a bullet shot into the Exeter Fire Hall.
Fireman, Jacob Miller, put on his fire gear to show the fifth graders present for the Junior Fire Patrol and when he removed his gear from his locker noticed a large hole in the wall.
Miller, recalled that on Friday, September 23rd one of the regular garden hoses had several holes in it when he washed one of the large fire trucks in preparation for the Homecoming pep rally. The last time the hoses were used on August 11th, there were no holes in them.
Once the hole in the wall of the fire hall was found, obviously made by a bullet, the department members present examined the hose and found several bullet holes, they also found a bullet lodged in the hose.
As far as department members could tell, the bullet entered the building and richocheted off of Miller's helmet changing it's course away from the fire truck and toward the hose that was on a reel nearby.  "We suspect my helmet took the brunt of the bullet and prevent damage to the fire truck," said Miller.
In addition to the hole in the window there is a great deal of evidence of additional shots fired at the building, hitting a door, the wall of the building, the metal gutters and metal roof.
Anyone with information should contact the Fillmore County Sheriff's Department who are investigating the damage.
Posted by Leesa Bartu at 5:04 PM