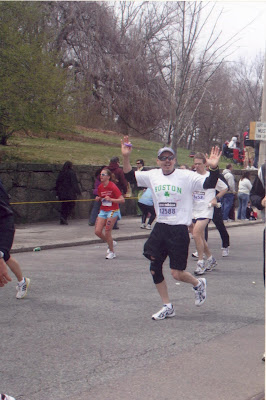 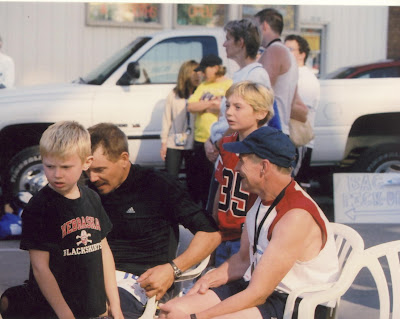 Getting ready to race Zelenka is picture with his son, Trevor, left, Dalton, right, and his running buddy, Randy Joe, far right in Iowa. 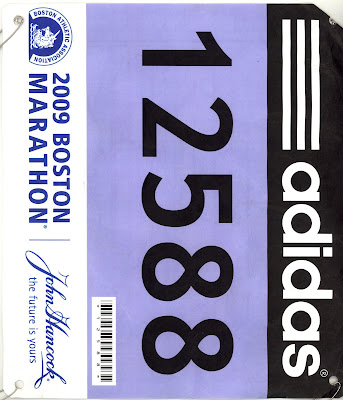 The number John Zelenka wore when competing in the Boston Marathon. 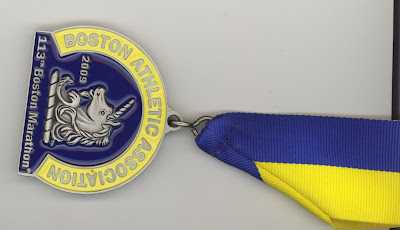 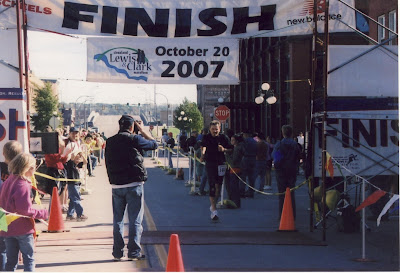 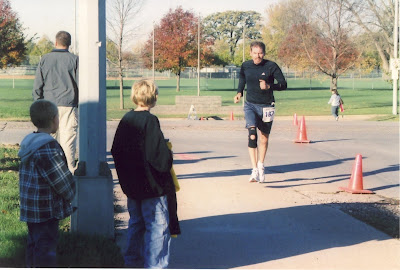 John Zelenka running a marathon in Sioux City, Iowa with his boys cheering him on, far left is Trevor, Dalton in the middle. 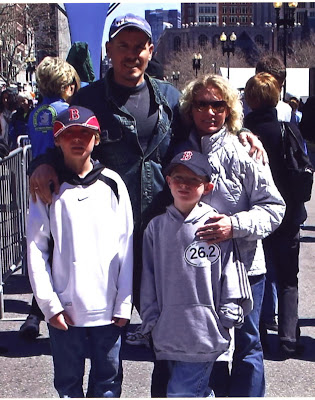 The Zelenka's posed during the mini vacation in Boston before John ran the race.  Pictured back row John and Traci, front row, Dalton, left, Trevor, right.
Running isn't everyone's favorite form of exercise and certainly hasn't always been Milligan resident John Zelenka's. In fact he didn't start to run seriously,entering his first marathon, the Lincoln marathon until the age of 42.

“We ran the first one, me and a buddy and that’s all we were ever going to do. A couple weeks went by and the pain wasn’t so bad so we ran Lincoln again,” Zelenka recalls, “I had it in the back of my head, running the Boston Marathon and I realized I was only 30 minutes away from qualifying time.”

Growing up Zelenka remembers seeing the New York Marathon on television and being “amazed that someone could run 26 miles.”

He certainly didn’t set out to run marathons, “I started out just wanting to get in shape and stay in shape.” He spends his days working for the Village of Milligan as their Water Operator and doing village maintenance.
As the thought of marathon running grew in his mind he began seriously training for marathons, getting up early to run, running in the evenings after work and using the treadmill when the weather or the light weren’t agreeable. Right now he spends about 45 minutes a day training, running around six miles.

As he continued to train after running his first marathon in Lincoln in 2006, Zelenka realized that his time at the 2008 Little Rock Marathon, a Boston certified race, qualified him for the Boston Marathon. Qualification lasts for about a year and half so Zelenka registered for the April 2009 Boston Marathon.

Between 27,000 and 28,000 people run the Boston Marathon each year and Zelenka found the qualifying for the race to be more exciting than running the race, “The first six miles of Boston I had to watch the guy’s feet in front of me so I didn’t step on him.”

Participating in the race was still a thrill for Zelenka, especially the outcome. Zelenka likes to note that his time beat four-time Boston Marathon winner Bill Rogers who also ran in 2009 (don’t ask him about the age difference between them). Zelenka finished the Boston Marathon with a time of 3:42:38.

The students in his kids’ classes sent him cards, signed a Boston shirt for him and watched for him during the Boston race on the internet. That helped motivate him as well, “I knew I had to keep going because the kids were watching for me.”

“People talk about how tough Boston was but I think Lincoln is the toughest,” said Zelenka. He figures that since he is familiar with the route in Lincoln it seems further and more difficult than the other races he has run.
Zelenka decided to set an unofficial goal for himself, “To run one a year, to go to a different state every year and take the family. We make a mini vacation out of it. This year we will go to South Dakota in May.”

So far he, along with his friend Randy Joe, from Fairbury, have run in marathons in California, Nevada, Nebraska, Massachusetts, Arkansas, Oklahoma, Iowa, Kansas and North Dakota. Joe missed Massachusetts and Boston, but otherwise they have been running together from the first Lincoln event.
Zelenka has found that he enjoys the races with smaller numbers of entries. “We did Kansas last year with about 300 people. The people are friendlier in these type of races.”

Zelenka has the rest of the family running as well. His wife, Traci, ran the half-marathon in Lincoln along with their son, Dalton, an Exeter-Milligan eighth grader. Trevor, in fourth grade, has started running fun runs. Last December John and Traci ran in Las Vegas and made another mini-vacation out of the trip.

Zelenka encourages others to give running a try, “You’re never too old to do something - it’s easy to talk yourself out of something. You’ve gotta go try and do it, if you fail, you fail.”
Posted by Leesa Bartu at 8:36 AM