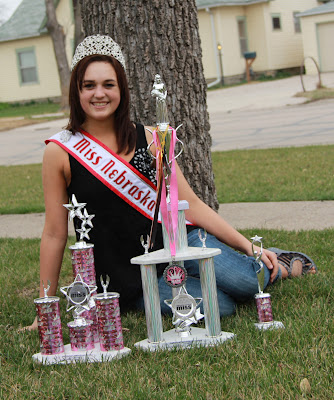 Some of Deidre Stevens dreams came true when the Exeter-Milligan ninth grader was crowned the 2011 National American Miss Nebraska Junior Teen in just her second pageant.

Stevens, the daughter of Hope Androyna of Exeter and Chad Stevens of Lincoln, was crowned on Sunday, April 3rd at the Omaha event.

The competiton was a three day event with Stevens participating in the “casual wear” and the “Top Model” categories. She found this pageant “A great starting point. Everyone was so friendly and it was so geared toward family. We were still marked on our looks, but you have to be well spoken and have personal interviews.”

Keeping along the family friendly lines the girls competed in an evening wear competition, a personal introduction, an interview with the judges, and an opening dance number. Stevens cleaned up in the optional categories where she took first in Casual Wear and second in Top Model.

Casual Wear was an opportunity for Stevens to choose an outfit and then model it for the judges. She also wore the outfit for the Top Model category where she, a judge and a professional photographer had a photo shoot. She will receive a portfolio of photos from the photo shoot.

Stevens was thrilled to have her father escort her for the eveningwear competition in his dress blues on Saturday night. Sunday evening her nerves were buzzing as the group changed quickly into formal wear and the optional category winners were announced.

The evening began to wrap up as the first nine finalists were announced and then Stevens recalled “a really long speech before I was called as one of the top ten. I was thrilled to make my goal to be in the top ten. When my name was announced as the winner I knew at that moment my life would change forever. Everything paid off, it was everything I knew I could do and they picked me out of 66 great ladies.”

Stevens hopes to share what she has learned with the young girls in the community, “You can have a goal and can accomplish it. I’m a perfect example, starting out not knowing what is going on to winning the whole thing.”

She will spent the next year making appearances across the State but hopes to make an impact at home. “I hope to spend the year being a role model for young girls, to get out in the community more, to be a representative for Nebraska the best way I can.”

To start with she brought home a huge box of new stuffed animals and books all donated by the other pageant contestants that she will be distributing to an organization locally. She is also looking for other community service projects.

This pageant, according to the National American Miss organization is “dedicated to developing the success of young women across our nation with a program that is designed to be age-appropriate and family-oriented. Emphasis is placed on the importance of gaining self-confidence, learning new skills, learning good attitudes about competition, and setting and achieving personal goals.”

Stevens will be heading to the National Pageant, which will be held in Anaheim, California at Disneyland in November competing with our state winners for over $500,000 in cash and prizes.

Stevens also participates at Exeter-Milligan on the golf team, in FCCLA, the all school play, one act play, in band as a cheerleader. She is also a member of the Exeter American Legion Junior Auxiliary.
Posted by Leesa Bartu at 8:34 AM