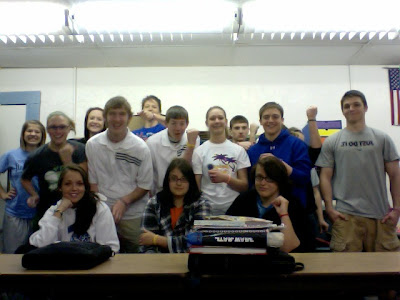 The Spanish I Class of 2010-11 has learned mucho (lots)
of things this year. We have had fun while learning it too.
In the first semester we learned about articles of clothing
in a fun way by having a fashion show where we described
each other's clothes in Spanish. We've learned colors,
numbers, common greetings and how to tell the location of a
place. Most recently we've learned how to make traditional
Pamiente bracelets (name of the bracelets in Guatemala) by
tying a series of knots with yarn of multiple colors to
create a one of a kind bracelet. They are called Pamiente
bracelets because two are seldom alike, if you see someone
wearing one just like yours you are destined to be best
friends. We've learned so much and yet there's still
more to come this year.
Posted by Leesa Bartu at 8:09 AM