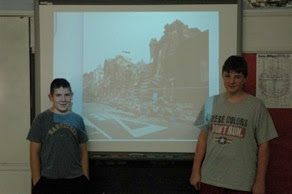 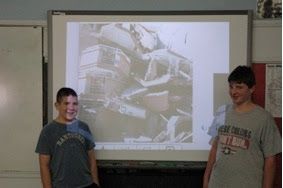 In my 8th grade Earth Science class, we are currently on the
Unit covering Plate Tectonics. This is the theory that
continents have moved slowly to their current locations.
Earthquakes and volcanoes are the direct cause from this
theory. We sit above a layer of molten rock called the
mantle; the crust is the part of Earth that consists of all
landmasses and floats on the mantle. Plates shift and
collide leading to destruction, much like what happened in
New Zealand a couple weeks ago. A major earthquake struck
this region along a transform boundary. Along this type of
boundary plates grind and slide past one another causing
seismic waves to race towards the crust, or the part of the
Earth that we live on. I had my kids either do a movie or a
pod cast talking about this natural disaster. Students had
to do their project similar to a newscast. I thought this
was a very beneficial project because I had students talk
about current events along with the curriculum.

Pictured are AJ Underwood and Zachary Kroll during their
presentation.
Posted by Leesa Bartu at 10:11 AM