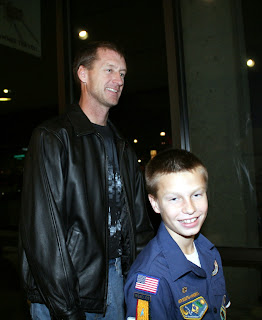 Exeter Webelos Scout Eric Olsen and his dad, Kent, wait in line for pizza at the National Treasure Event at the Nebraska History Museum. 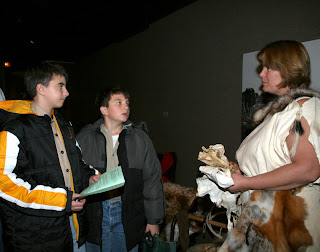 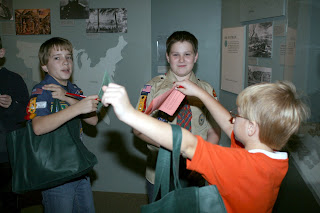 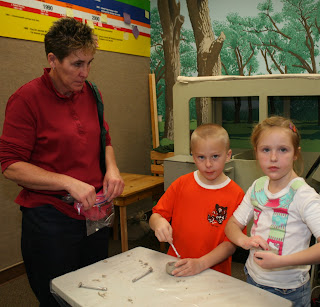 One night in two museums clues and crafts were plentiful in Lincoln.  With close to 600 cub scouts attending the Nebraska History Museum and the Lincoln Children's Museum were overrun Friday evening.

The Cornhusker Council of the Boy Scouts of America planned and sponsored the two museum event billed as the Nebraska Treasure.  The scouts were given a guidebook at the door depending on their age. Siblings and parents also attended to help search for the clues hidden throughout the two museums.

It was all about decoding during the evening.  The scouts had to break the codes found in the clues they were given by finding the museum displays where the clues were hidden.  Each floor of the museum had a different type of code to break. Along with the codes there were crafts and activities for the scouts and siblings to complete.

After the scouts "broke" the codes and discovered the password they progressed to receive a sticker that held part of the final clue. As the scouts headed to the Children's Museum they learned about Braille, cryptography and secret messages hidden in disappearing ink.

Once the scouts had all four stickers they discovered the final clues: Nebraska History Museum, Seek the Arrow, Chief Akela and First Floor.  They were able to attend a brief presentation by the Golden Sun Lodge of the Order of the Arrow and learn more about Boy Scouts.

Seven Exeter scouts attended the event with their parents and leaders.
Posted by Leesa Bartu at 9:22 AM