Santa got stuck. There was no two ways about it. The Exeter-Milligan Elementary students told the story of his unfortunate incident but the aftermath of the event was even more unfortunate.
After that fateful evening, Mrs. Claus and the elves had begun to chart Santa's weight. As Christmas approached, Mrs. Claus checked the chart only to find that Santa had gained weight, not lost it.
Sharing in part of the blame were some of Santa's elves who revealed some of his hiding spots for his favorite goodies, in the toys, and even under his hat.
Mrs. Claus decided that something had to be done and decided to enlist the assistance of Betty Body's Health Haven.  Santa enrolled himself in Betty's program but was still supplied with his favorite junk food by his head elf Hughie.
Once discovered Santa is kicked out of the health haven but when he returns home he, with the help of the pizza delivery person discovers that the odds of him getting stuck again are slim to none, and he really likes all the junk food too much to ever be slim.
Exeter-Milligan Elementary students presented the musical to family and friends Tuesday evening in their annual performance. Santa was played by Trystan Brandt with Samantha Horne as Mrs. Claus. Hughie, the head elf was played by Trevor Luzum with Joan Strate playing Betty Body. The rest of the sixth grade class played elves and other assorted rolls.
To start the evening, the Exeter-Milligan fifth and sixth grade band played three classical Christmas tunes, followed by the fourth graders on their recorders.  The kindergarten, first and second graders all had their chance to perform individually and as a group.  The third, fourth and fifth graders participated in the musical provided back up music and full cast numbers.
After the evenings entertainment the attendees were welcomed to a Christmas tea in the cafeteria. 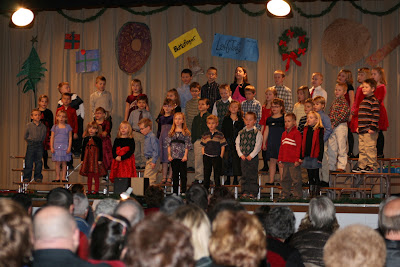 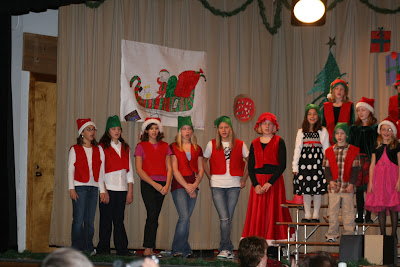 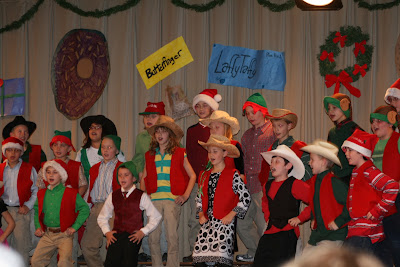 Exeter-Milligan third and fourth graders performing "Fit as a Fiddle." 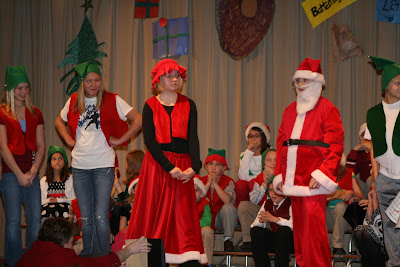 Mrs. Santa discovers that Santa has not broken his bad eating habits. 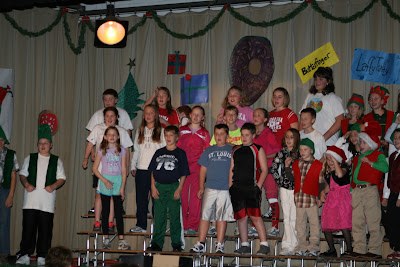 Exeter-Milligan fifth graders Shape up with Santa.
Posted by Leesa Bartu at 12:30 AM