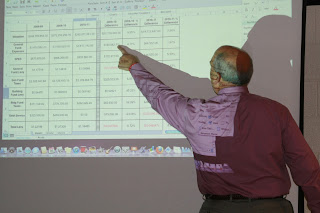 On Monday evening Exeter-Milligan Superintendent Paul Sheffield presented a power point overview of the district levy override measure that will be presented to voters on November 2nd.

Despite the debated topic a small crowd came to hear Sheffield's presentation and ask questions during the open session.

Sheffield noted that there have been two successful passages of override bills in the past, it was last renewed in 2005 and will expire with the end of the 2011-2012 school year.

Sheffield explained the importance of the override to the district, noting the fluctuations in state aid with the district receiving just $32,948 from the state toward their $4.3 million budget.

With charts and graphs, Sheffield explained how the levy funds go into two separate accounts, a general fund and a building fund.  The last few years the building fund has been given a greater percentage, going from .02 to .07. Recently the district has tackled several projects including replacing flooring in the Exeter site high school, as well as the phone system and painting the Exeter site gymnasium and replacing the gym lights, school surveillance and sound system.  The sofit and fascia has been replaced at the Milligan school.

Out of the general fund, the district has made great advances in technology for the students. Many of the classrooms boast smart boards and Sheffield also cited the laptops that all of the 7 - 12 students are using.

Sheffield discussed at length the opportunities that Exeter-Milligan students have in regards to coursework.  He explained that the minimum the state requires is 400 course offerings and currently Exeter-Milligan has students enrolled in 547 different courses. This total does not include distance learning.


"I'm asking for another five years starting with the 2012 school year.  There is a possibility that we won't need to use the override if the valuations continue to rise.  If the pipeline (Keystone XL Pipeline) is approved it will also add to the valuations," said Sheffield.

At the conclusion of his presentation Sheffield opened the floor up for questions and several were presented on the efficiency of the Milligan campus.  Sheffield had prepared a chart showing the physical plant costs of the campus including transportation which totalled $42,300.  He estimates closing the building would "save about $30,000 because we would still have the same amount in transportation costs because we would have to run two buses from Milligan."

In addition, Sheffield noted that "we are at 99% capacity at the Exeter site according to the recent facilities study we had done."  He spoke of the space needed for the extra reading groups with the new Reading Mastery program and the possibility of the TYKE program returning to Exeter.  "If we were to close Milligan we would have to do some building here."

However, when pushed on the issue of consolidating to one site, Sheffield would not give a black and white answer.  When questioned on whether attendance would make the decision he would not give a definitive answer either.

Another topic of discussion was the Timberwolf home football field.  Sheffield explained that the city of Milligan owns the property but the district maintains the property unless repairs are over $200.


Sheffield will also make the presentation in Milligan at the Exeter-Milligan Gymnasium on Wednesday evening at 7:30 p.m. After the brief power point Sheffield and Exeter-Milligan Board members will be available to answer audience questions.
Posted by Leesa Bartu at 12:23 PM