One to One Laptop Program Ready to Go at Exeter-Milligan 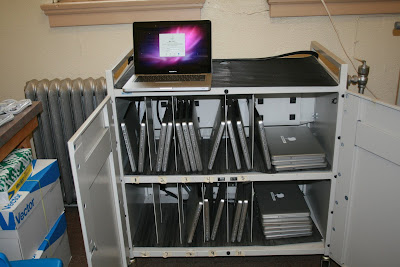 It’s a life-learning tool all wrapped up in a sleek 13” Macbook Pro and every Exeter-Milligan seventh through twelfth grader is about to experience one.

The district is “preparing our kids for life outside the friendly confines of Exeter-Milligan school to be the 21st century learners they are,” according to Superintendent Paul Sheffield.

With a goal of eventually becoming paperless the district is passing out the laptops starting this week with a group of parent/student orientation meetings. During the evening sessions students and their parents will sign a contract and pay a $35 fee if the students want to have the privilege of taking the Macbook’s home.

The students will not be able to access the internet in general but all internet traffic, no matter where they log on, will be re-routed back to the school’s filter. The filter, according to Sheffield, is designed to have different access times. Right now, email and social networking are blocked during the day but will be opened up in the evenings.

Most of the cost of the new program has been financed through a grant from the Rural Education Achievement Program (REAP). About $30,000 came from the REAP program that “was earmarked toward technology,” according to Sheffield.

The total cost of the program was around $45,000 and there will be “some stimulus money that carries over for special ed and that will come out of there,” said Sheffield. The rest of the funding will come from the school budget.

The students will have to be responsible for the laptops and those who don’t pay the extra fee will check their laptop in every day after school. The fee money will go to a fund for minor fixes or maintenance issues. Sheffield explained that, “If the laptop is stolen or something major is broken the kids are responsible, they have to sign a contract.”

When pursuing this project the school did a survey and found that 93% of the students had internet access or wifi at home. Right now the wifi at the Exeter campus reaches about a half a block away. Unfortunately there is no where else in town the students can access wifi right now.

The students will use the laptops in class for research and also for homework. The school currently uses a site that allows teachers to post homework assignments online and also lets students drop their completed homework into a teacher’s online basket. Sheffield stated that the laptops are “

Not going to replace or be a cure all, but another tool at their disposal to enhance their learning.”

One of the most important things the school wants to emphasize is internet responsibility. They are “l

ooking to incorporate a digital citizenship class in grades 4,5, and 6. . . teaching kids to know what kinds of things to put on internet and what not to,” said Sheffield.

The school hopes to emphasize the responsibility of having a tool at students' disposal while delving into some of the fun aspects of technology like creating movies and pod casts. Thanks to the REAP grant, Exeter-Milligan students will have an opportunity to have some fun while learning.