Quilt of Valors Presented in Exeter 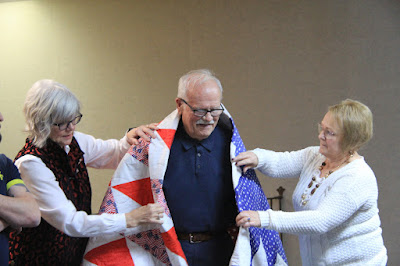 Ronald Chrans is helped by his former daughter in law Penny Thompson (right) while he is presented a quilt of valor by Pat Becker (left). 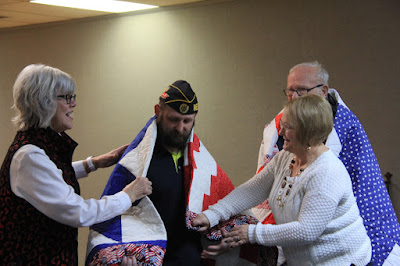 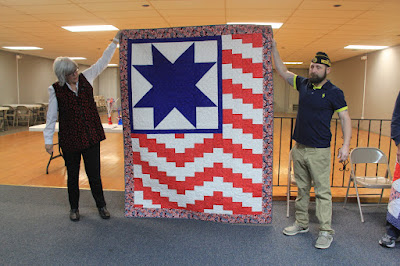 Above- Pat Becker (left) and Adam “Ace” Chrans (right) hold up his quilt of valor.

Below- Pat Becker (left) and Ronald Chrans (right) hold up his quilt of valor. 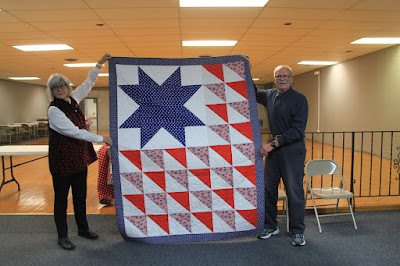 The Chrans family has had a member of the family in the Navy every decade since 1950. Adam “Ace” Chrans of Exeter along with his grandfather, Ronald Chrans of Michigan, were recently presented with Quilts of Valor at the Exeter American Legion home.

Pat Becker, a representative with the Quilt of Valor program gave the presentation Monday, November 14th and spoke about how the program was started in 2003 when QOV founder Catherine Roberts’ son was deployed in Iraq.  A dream gave her the idea that quilts from home would be comforting to those serving and so she began to make them to award to active military along with veterans.

Roberts created a non-profit foundation to guide the project.  Since 2003 over 326,777 quilts have been awarded to those who have served, “A Quilt of Valor says in a way that words cannot express, we thank you.”

Becker added in presenting the quilts, “As a grateful nation to thank you both for your time in military service. . .and for putting your lives on hold for serving your country.”

Becker along with fellow Exeter American Legion Auxiliary member Patricia Rocole made the quilts that were presented to the Chrans’.

The family all graduated from Wilber/Wilber-Claytonia and those in the Navy include Ronald (1952), his son Ronnie (1980), grandson Ace (2004) and granddaughters Nicole (2002) and Danielle (2006). A great-grandfather of Ace served in the Navy in World War II.

Ace was given the opportunity to speak about his service and started off thanking but the auxiliary members, the legion and the community of Exeter for embracing him when he moved in town several years ago.

After graduating from Wilber-Clatonia in 2004 he joined the Navy and was part of the Operation Enduring Freedom.  He was an E5 when he left the service.  He did his basic training at Great Lakes, near Chicago and then was stationed on the USS Pearl Harbor out of San Diego.

During his service he was an engineman and worked on diesels, boilers and other equipment.  He served a total of 4 years 9 months and 28 days and ported in 16 countries.

Dad, Ronnie, joined the Navy in 1980 after graduating from Wilber-Clatonia and was an aircraft support technician (AS) and served during Desert Storm. He made a career of the Navy before passing away in February of 2012.

Ronald graduated from Wilber High and headed to Doane College in 1952 where a buddy thought they ought to enroll in the officer program.  That program served him well as he did four years in the reserves, and then made a career out of the navy with 27 years active duty.

Ronald was a naval aviator with 3700 hours of flying and 370 carrier landings with 120 of those at night. During his career he was stationed in Pensacola, Florida, Key West, did a cruise to Europe (dropping sonar buoys and finding 5 Russian subs), was officer in charge at a base in Christ Church, New Zealand (supporting Antarctica) and ended up in San Diego.  He served two deployments in Vietnam.

Along the way he got a Master’s degree at Monterey, was assigned to the War College, flew around the clock for one month and shook the hand of Prince (now King) Charles. He retired with the rank of Commander and now lives in Michigan.

“I love the Navy.  I got to see all over the world,” Ronald stated.